There's this strange feeling I get when carrying luggage through a train station. Something about the noises and sensations that remind me of my past travels and it fills me with wanderlust. It was this, combined with nervous excitement that stirred my heart as I climbed onto the escalator, ascending out of London's Underground into the early morning light at Euston. What awaited me at the top was not just Sunny and a greasy breakfast but a high speed train north, towards Snowdonia in winter.

Two trains, a taxi, and a Sherpa bus later I was tightening my laces and picking up my pack in the Pen y Pass car park. This was to be our first of four days in the region and we would begin with a challenge. Welcome to Snowdonia in winter. 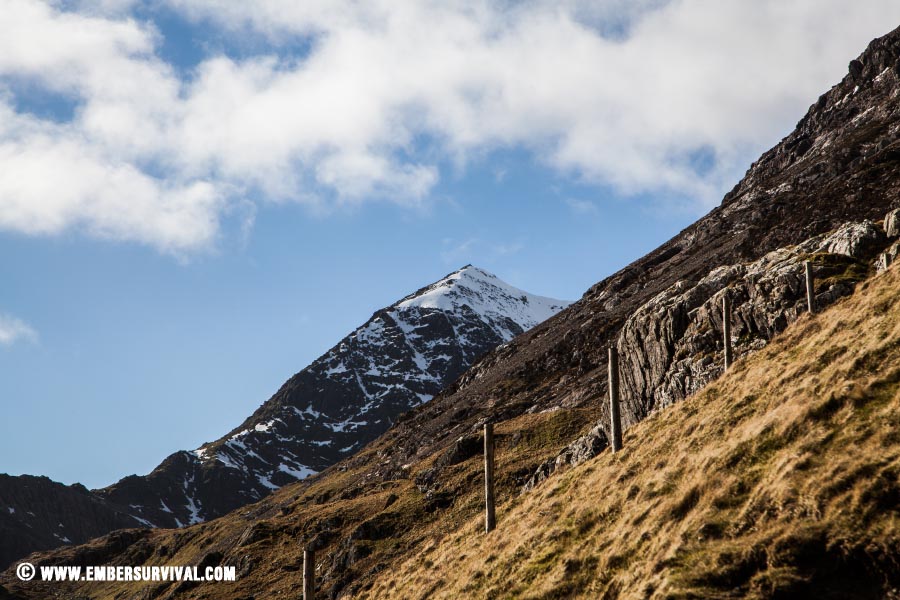 Looking at the summit of Snowdon covered in a white blanket.
We headed up the Pyg track for a short distance before cutting off up a steep scramble to Crib Goch where we would follow the arête towards Snowdon itself on a route known as the horseshoe. The weather was fine with only a breath of gently cooling breeze. 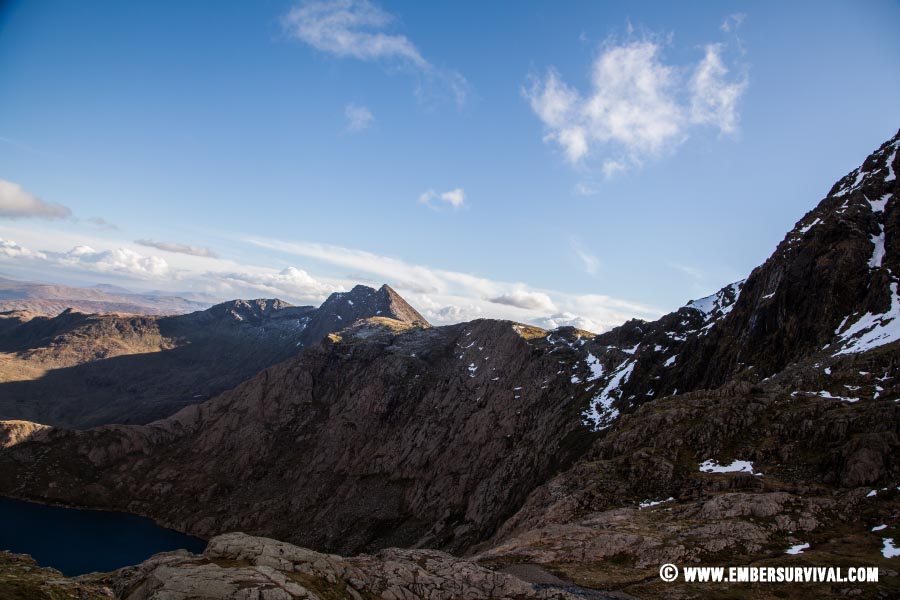 Keen as mustard we left the track and headed upwards, it was only a matter of meters before we were using our hands to assist our ascent. As we scrambled upwards we became rapidly more exposed to the freshening wind from the north and it was only a very short way up that we had to reassess the situation. The path along Crib Goch followed a knife edge and the wind now was already reaching a speed that made us nervous as we scrambled. 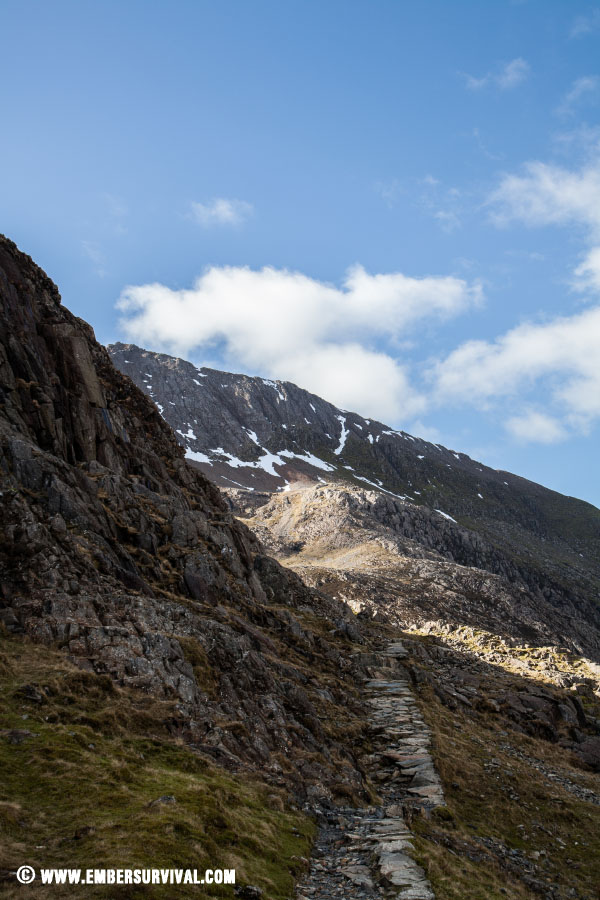 A big part of what we do on these trips is about pushing our own boundaries and conquering some of our own physical and mental limitations but even so the most important thing is living to fight another day, so with the wind and the unfamiliar ground in mind, we turned and headed back to the track. Whilst I wish we had taken the high route, if placed in that situation I would always do as we did. But as it turned out our "easy route" was not to be as plain sailing as we imagined. 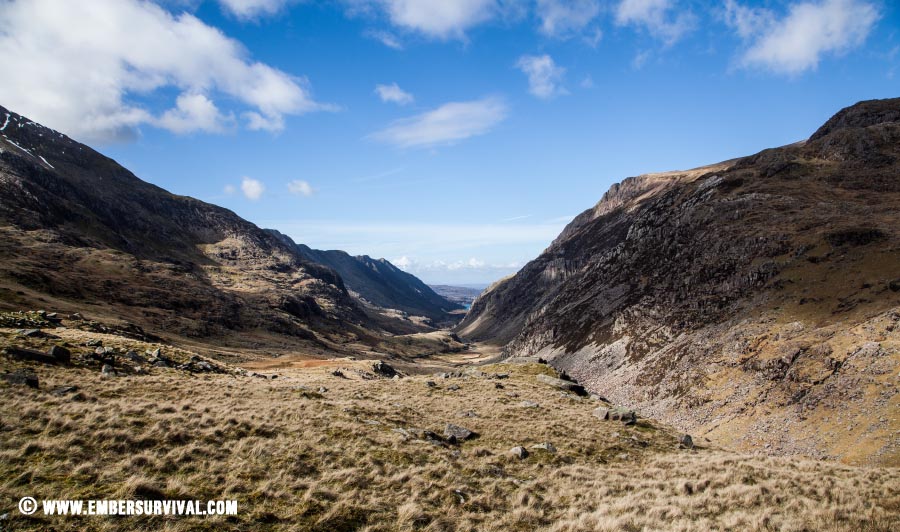 Back on the Pyg track we continued west, with Crib Goch ascending above us and the Miner's Track below.  As we moved on, so more and more of the snow-capped peak of Snowdon appeared and again we began to fear for our ascent as it became clear that our route up the valley was snow covered towards the crest. The top of the Pyg track meets the Ranger and Llanberis Paths to the summit on a flat topped ridge. As we looked up towards this ridge, which stands a little less than a kilometre above sea level, we could see evidence of an earlier avalanche and several cornices formed by windblown snow. As we approached we carefully assessed the situation and stopped and interrogated each passing walker or climber for their own account of the summit. Some had made it, some had turned back. 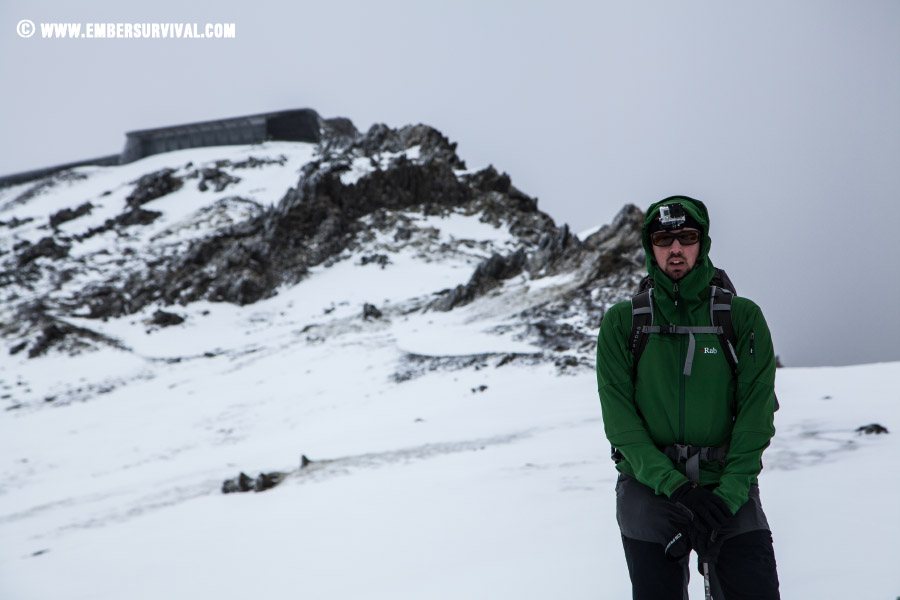 It was during this ascent that I was really reminded of how much I enjoy the company of like minded people. I have yet to meet an unpleasant person on a mountain and it really is a great leveller. On the way up we stopped and spoke to old men, young couples and everything in between and each was happy to pass the time of day and share their experiences with us. I feel this is really important and it's one of the reason's I really enjoy working with Ember; I get to pass on that enthusiasm to others and hopefully get some more young people into the outdoors.

Luckily for us the Pyg track, whilst steep is fairly simple and well trodden snow proved little challenge for most of the ascent, even near the top there were still times when we could pick our way along exposed rocks from the track. Approximately 20 meters from the top we looked up to see that our path would take us below a cornice and several sets of crampon prints lead to a cutting through it to the top. With no crampons we decided this too risky and turned to face directly upwards using the fronts of our boots to kick steps into the snow. From the shadow of the mountain I broke the crest first, into the afternoon sunlight and a stunning sight. As my head cleared the snow a vision of green perfection was revealed before me, green lush hills bathed in sunlight with glistening lakes scattered like so many jewels between them.

The final climb to the summit is steady from here, Sunny and I ascending the steps buzzing with exhilaration. After some macho fist bumps we quickly descended the snowfields on the back on the mountain and searched for our first campsite. 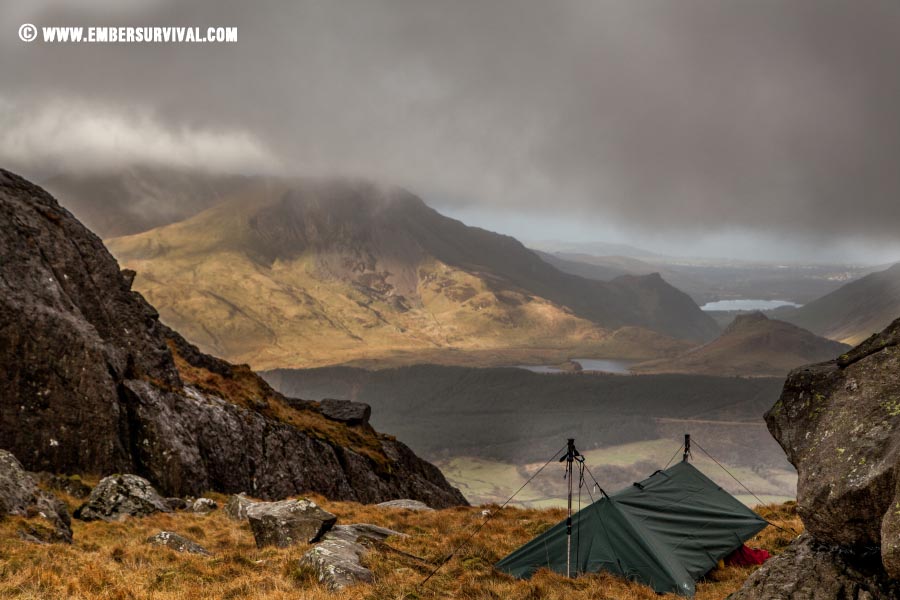 Over the next three days we continued to explore the area, camping two nights and staying another in a guest house in Llanberis. Sunny had a chance to test out the Snugpak Ionosphere whilst I stuck with bivi bag and tarp, a setup that would really be tested in the strong winds of the second night. Let me just say this, if you want to set up a tarp in the open in Wales I suggest using something more retentive than regular round pegs unless you want multiple excursions into the driving rain in naught but your keks to re-peg the errant tarp.
-Ed
Back to Top