From Lake Te Anau the Milford Road heads north with mountains growing on either side as it leaps from lake to lake along the Eglinton Valley. It was on this road, at a place known as the Divide; I would start my next adventure. The Routeburn Track in New Zealand.

This would be another of New Zealand's Great Walks, the 32km Routeburn Track. For the next two days I would be heading north east across the Southern Alps, crossing from Fiordland National Park into Mount Aspiring. 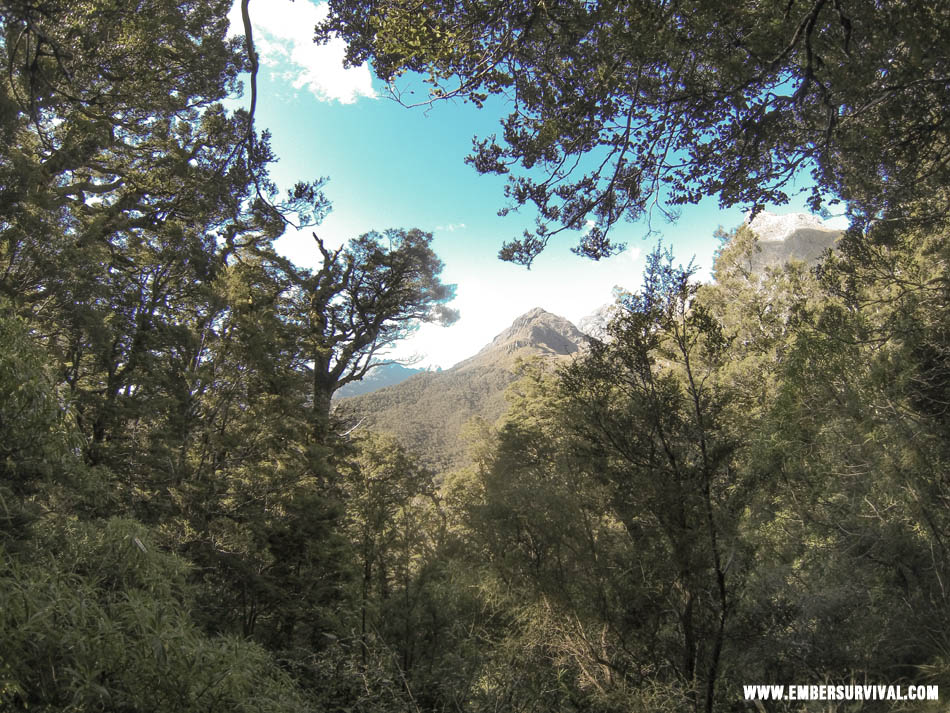 The trip started with bad omens. After deciding to take a diversion en route and visit the stunning Milford Sound my car began to suffer from the harsh climbs of the mountain roads. As I pulled into the Divide with smoke billowing from the bonnet I feared the worst. With the afternoon running out I knew that I would have to push for my first checkpoint if I was to make it before dark. Donning the pack, grabbing my poles and setting off to face the climb from the valley. I always find the first few minutes of a trip like this uncomfortable as my muscles warm and loosen up and this was no exception as the track worked its way up away from the Eglinton.

This section of path crests just below the top of Key Summit, a peak I would visit at the end of trip, before dropping slightly to Howden Hut, the first of four Huts on the route maintained by the Department of Conservation. With nearly 9 km remaining that evening I strode straight past the hut, across the short stretch of wetlands and followed the track up the far side, this time climbing into the Ailsa Mountains. 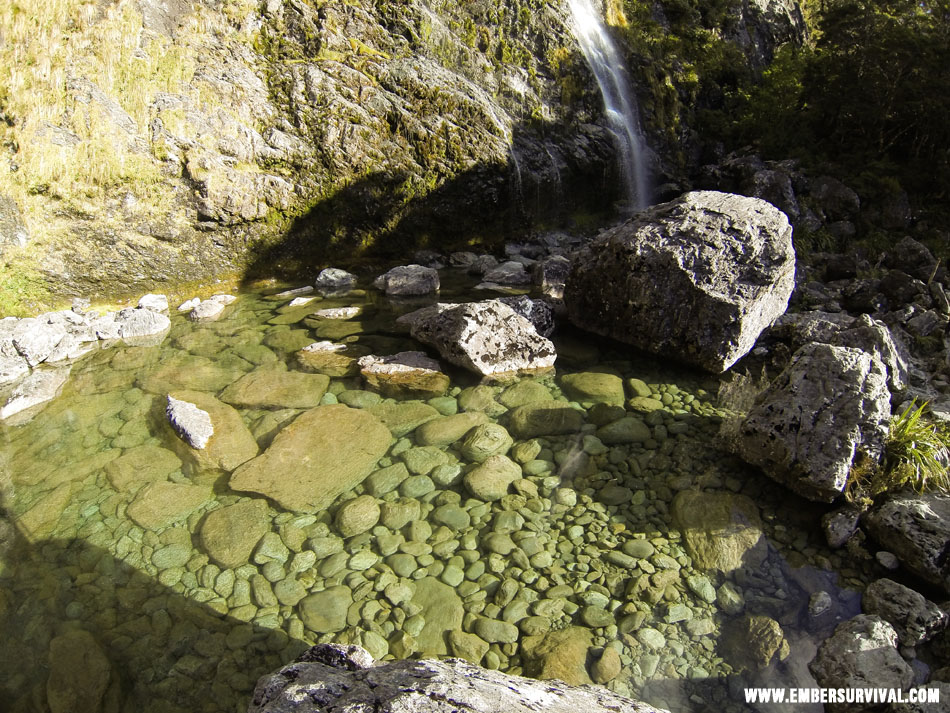 With New Zealand gripped in a countrywide drought I counted myself lucky that the last few days had seen rain as I arrived at Earland Falls. Looking up into the bluest of skies I could see the water pouring from Lake Roberts 174m up the stepped face, cascading down over moss covered rocks before settling in pale green pools. A perfect spot to stop and enjoy some cold New Zealand Lamb in the autumn sun. 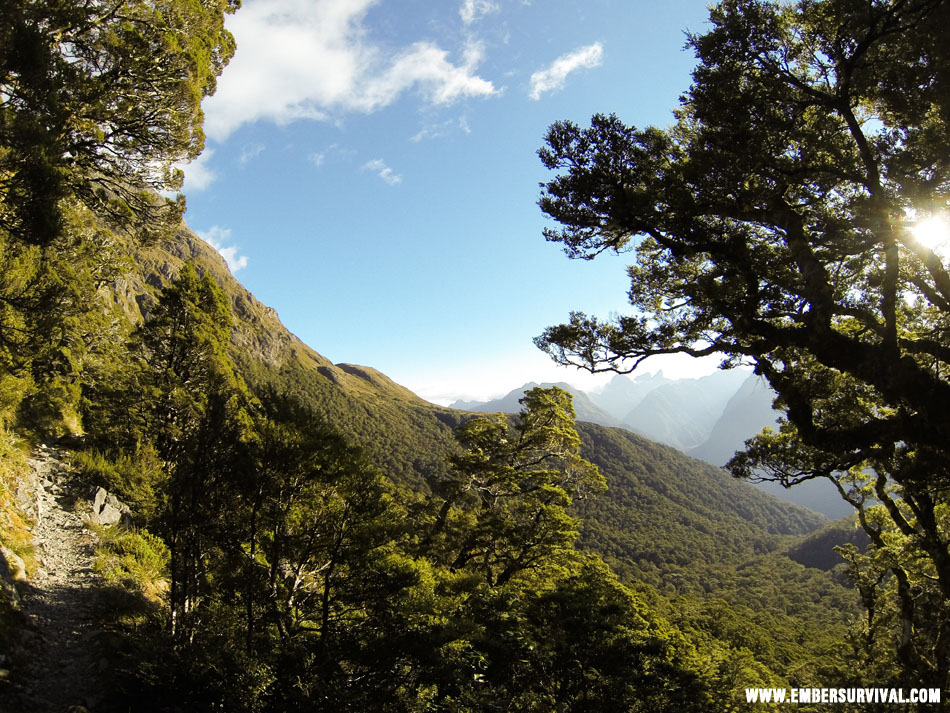 From the falls the track follows the western face of the Ailsa Range, with frequent glimpses of the Hollyford Valley through the trees. The track passes through an area known as ‘The Orchard’, an open grassy area dotted with Ribbonwood trees. The track eventually peaks just below 1000m and as I descended towards Lake Mackenzie the sun was also going down behind the Darran Mountains to the West. As its intense heat lessened the temperature rapidly started to drop towards freezing and I was glad to cross Roaring Creek and arrive at the hut where I would be spending the night. Shortly after first light I enjoyed my morning porridge and prepared to leave the hut. In the crisp morning air I started my walk, the valley was shadowed by the mountains and I knew as I climbed to meet the sun that it would some time until I saw it. I've started to become used to early morning climbs, from the lake the track climbs 300m before looping back onto the exposed Hollyford face. The weather was perfect for my trip but I can imagine this leg of the trip being quite challenging during winter and indeed it is often shut by snow. The track stays fairly level as it contours along the mountainside towards the Harris Saddle. 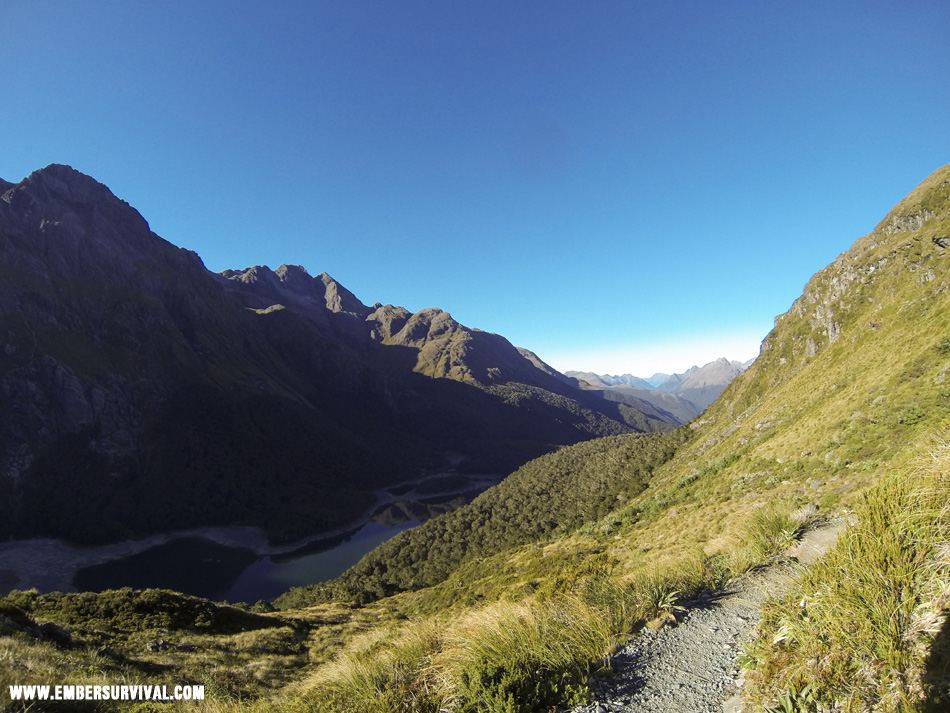 About half an hour before I reached my lunch stop at Harris Saddle I passed Deadman's Track, this challenging path is only 3km long but descends 1000m to the valley floor below. The Department of Conservation estimates the climb to take 5 hours and as I pass by I can well believe it. 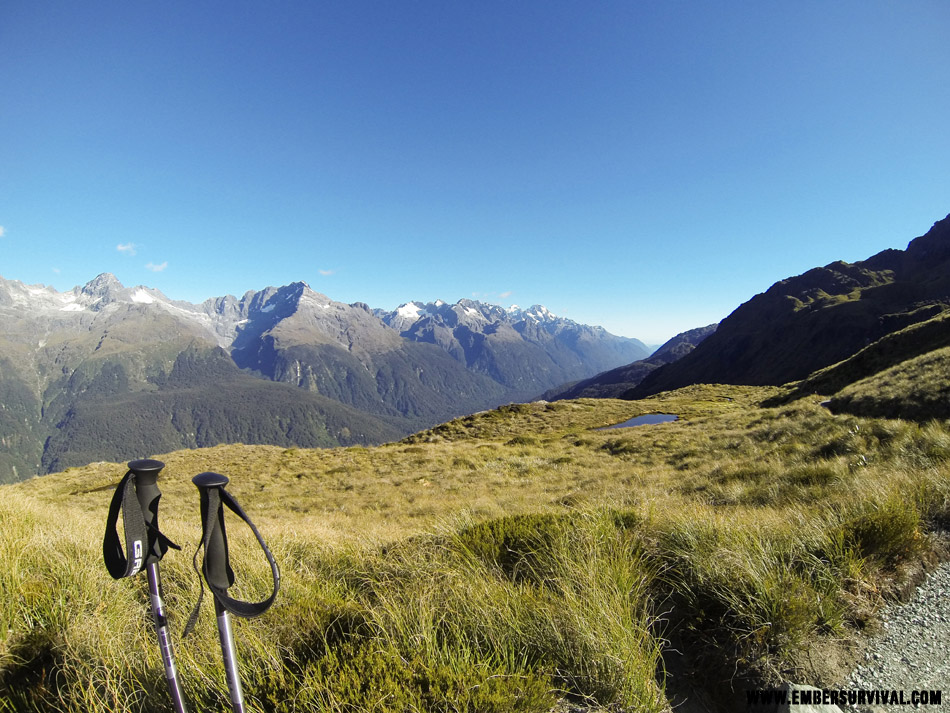 I stopped here for several minutes to watch another hiker sweating his way up but I soon realised that he was going to be some considerable time before reaching me. From here I followed the short climb to saddle and the emergency shelter. 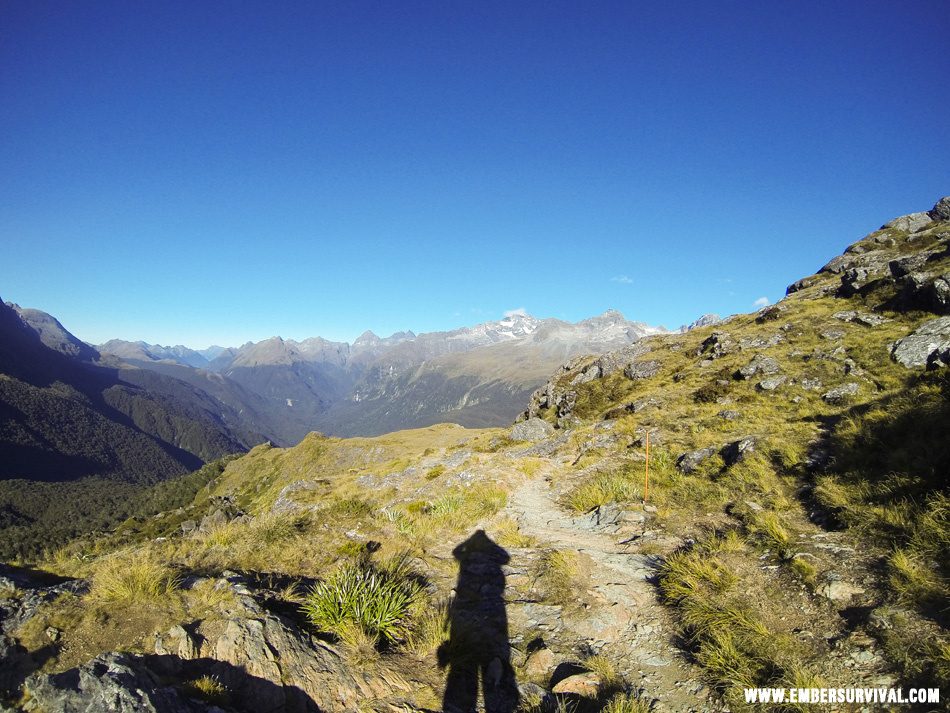 From the saddle a side track runs up to the peak of Conical Hill. Although it adds a couple of hours to your trip it is well worth taking, particularly on a clear day. Looking up at the immaculate blue sky I dropped my pack, grabbed my camera and made for the summit. It's a reasonably challenging section, short but steep with many areas taking you across exposed rocks. With good boots and dry weather it does not pose too much of a risk but in wet or icy conditions it could become quite treacherous. Pulling yourself up the last section of scree makes all the sweat and toil worth it as what seems like the whole world opens up in from of you. 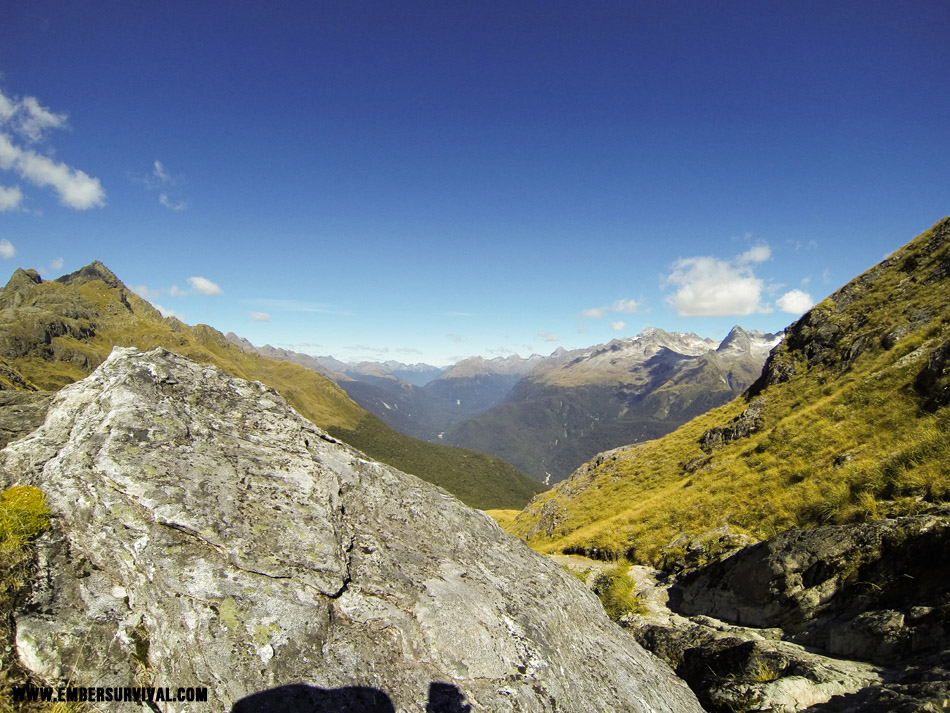 Ahead your eye follows the Hollyford Valley along to Whakatipu Waitai (Lake Mckerrow) and eventually to Martin's Bay on the Tasman Sea. At 1500m this seems like a lofty perch until you look to the east, where Mounts Xenicus and Erebus climb almost 500m higher, or to the west and southwest, where the immense Darrans are crowned by Mount Christina, a whole kilometre higher than Conical. 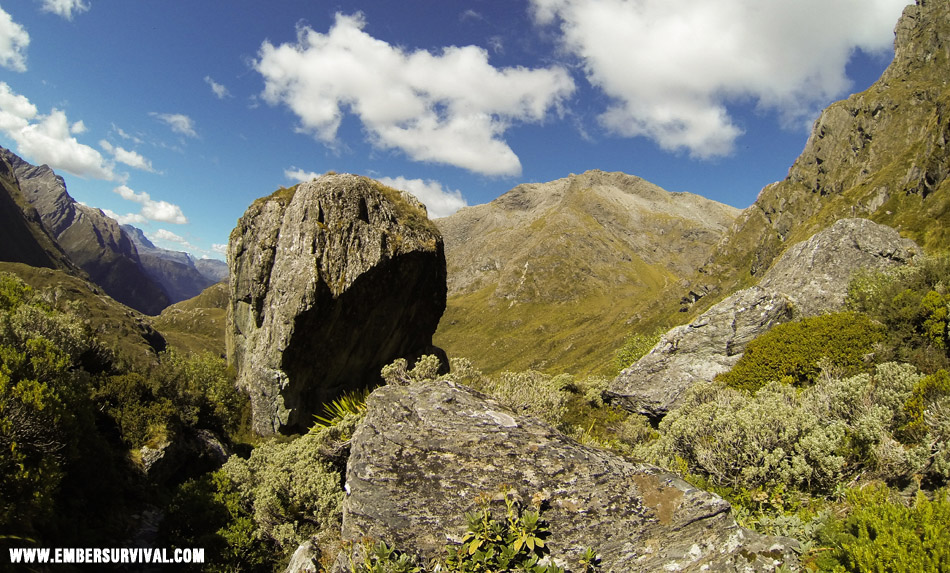 To the south and southeast you can look down on Lake Harris and Routeburn snaking away into Mount Aspiring National Park. 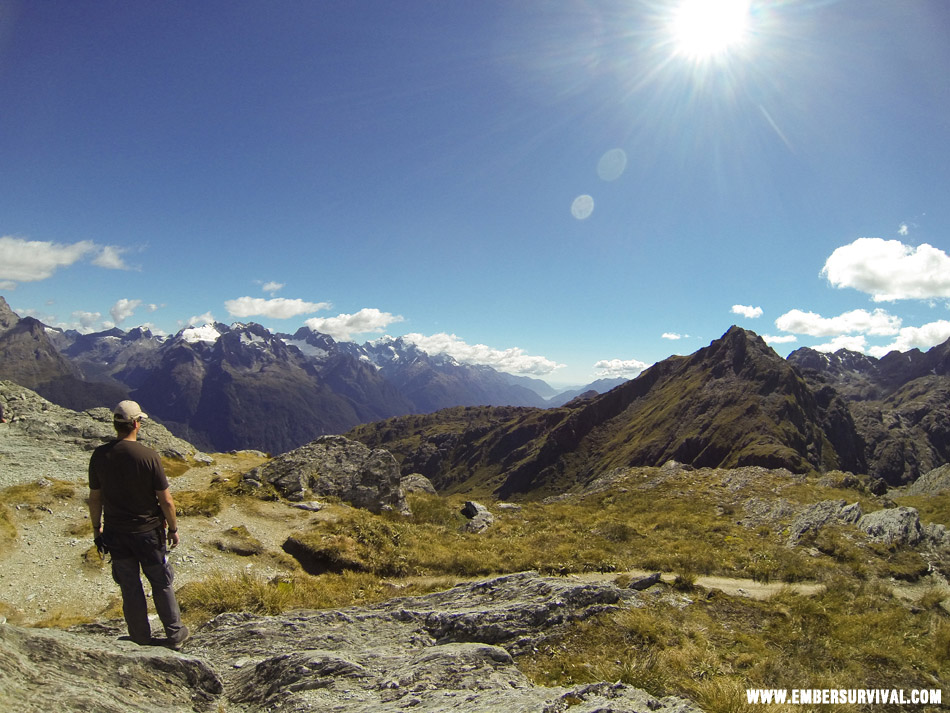 At the shelter again with pack back on me the track leads along a ledge overlooking Lake Harris, an alpine lake nestled between three peaks and flowing into the West Branch of the Routeburn. The Harris Saddle marks the boundary of Fiordland National Park, from here I would be descending through Mount Aspiring. 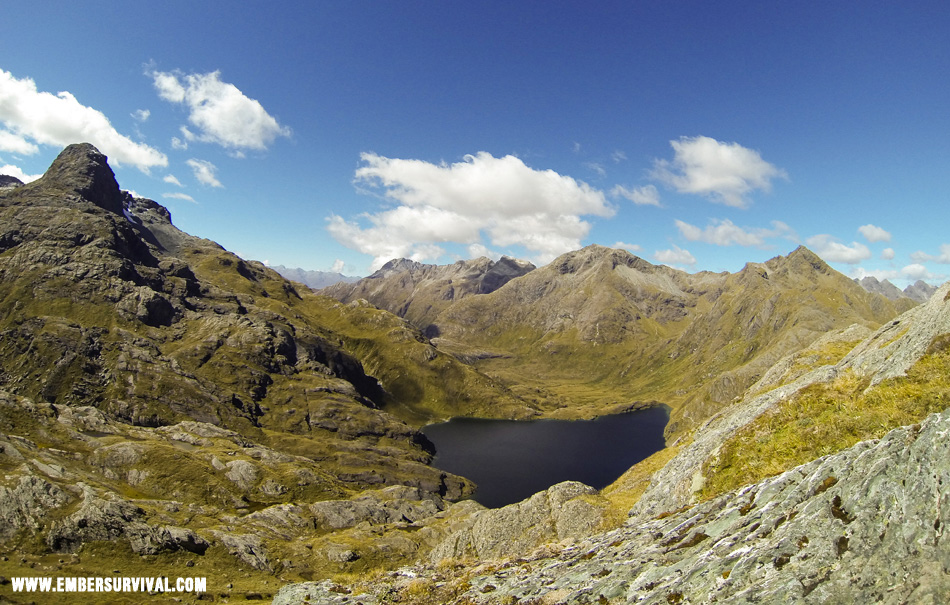 After the bare scree of the higher Hollyford face this side of the range seems lush, after the recent rains the grasses and tussocks cover all shades of green, right down to the deep dark green of the trees below the bushline. The track took me down to Routeburn Falls, the site of the next hut. 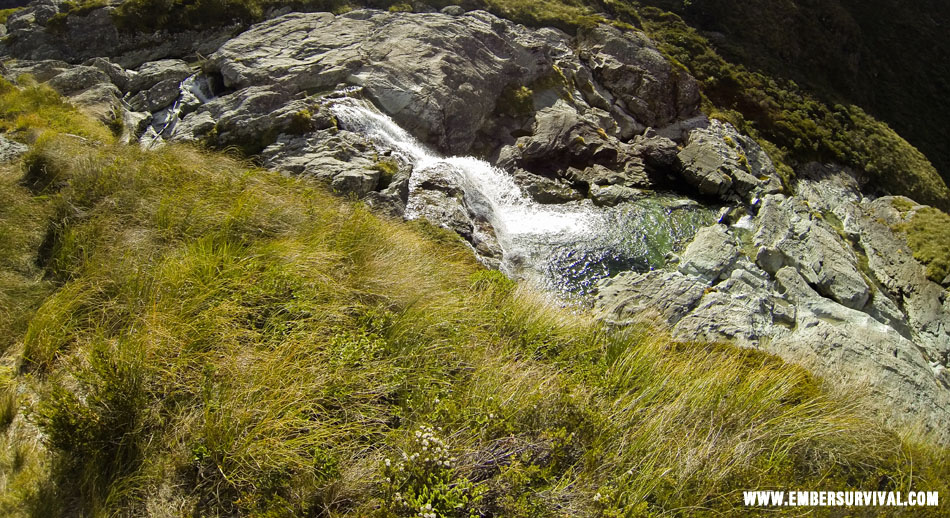 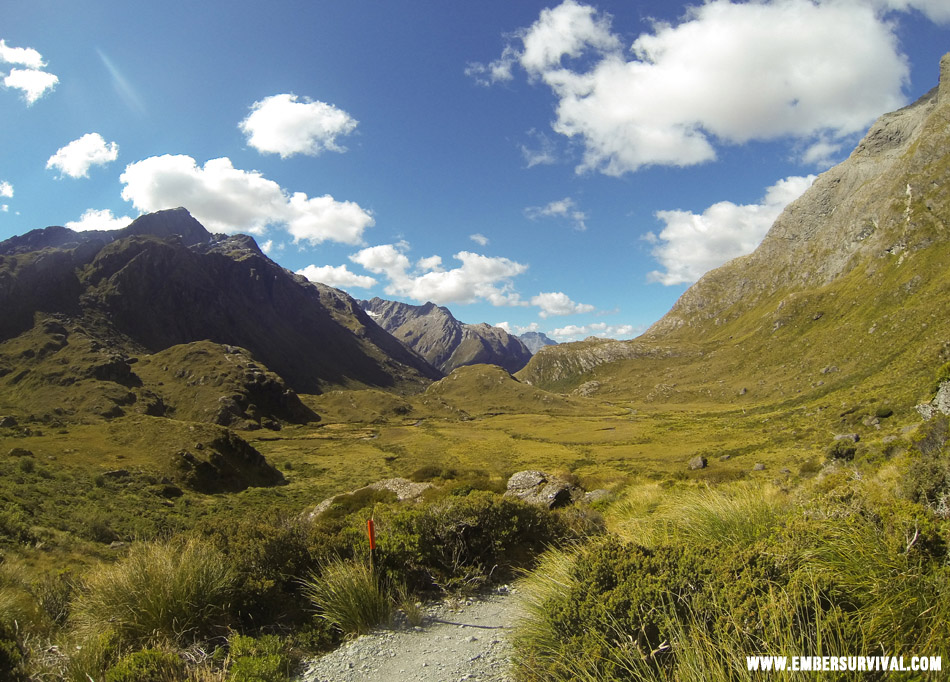 As I passed the hut I also dropped low enough for the forest to rear up around me, the low ferns and tall dark trees that are so familiar from my other trips in the area. 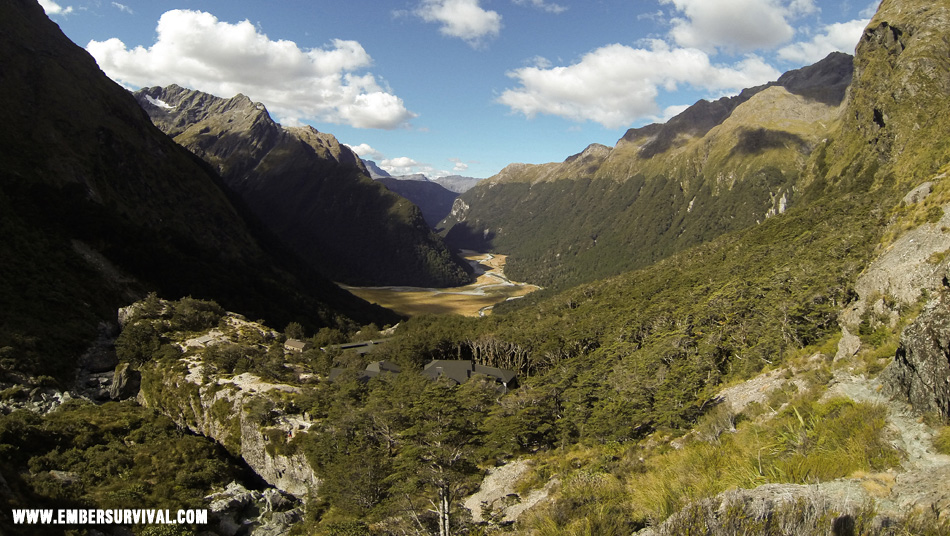 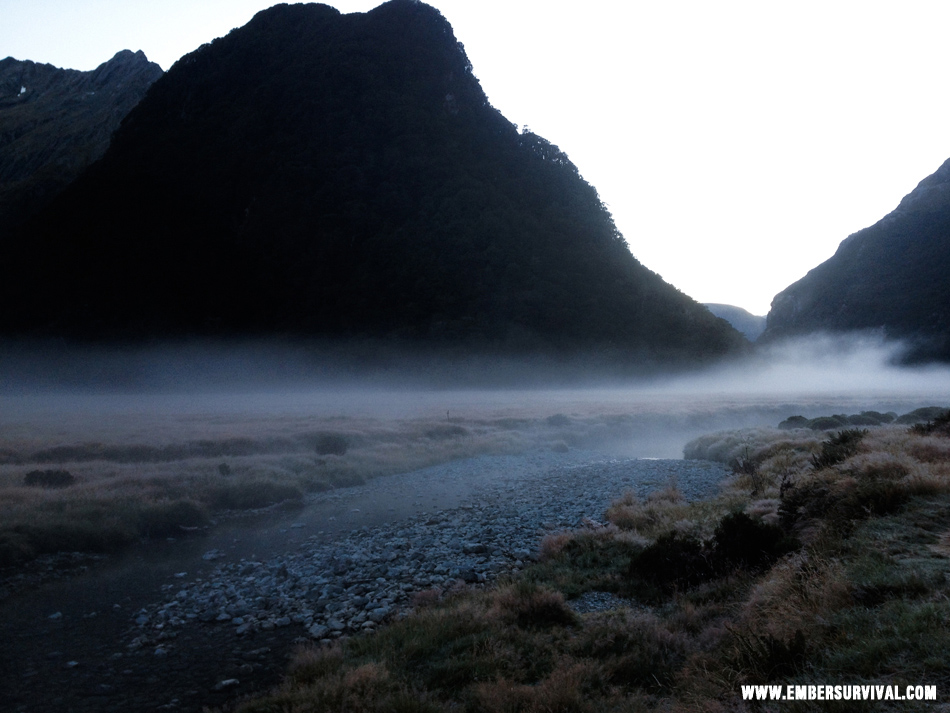 It's easy to forget the effect that altitude has on the temperature. Despite being safely ensconced in my tent I could feel the limitations of my lightweight bag. Still, I managed a good night’s sleep and woke early for a long day. With frost on the tent and mist across the valley I could really remember why I do things like this. Wrapped up in all my insulating layers I enjoyed hot porridge in the utter silence of a mountain morning. 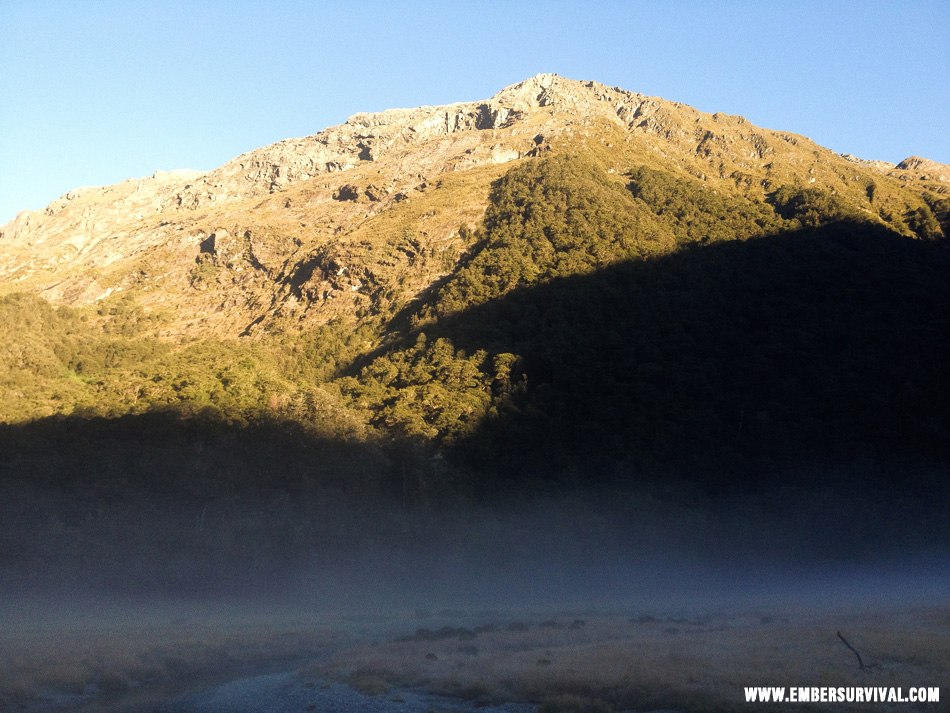 After a quick pack up I began the short walk to finish the Routeburn Track. I was assaulted by one of the locals not 500m from the campsite. A South Island Robin came from the bushes and hopped fearlessly over to me, before climbing on my boot and searching my laces for food. 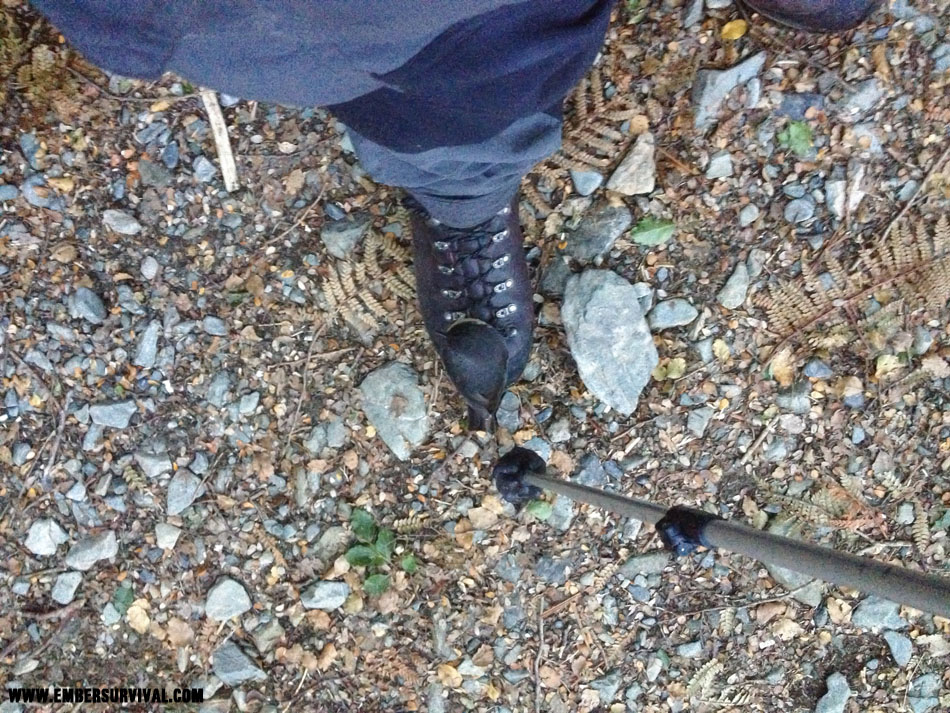 With the sun still rising I followed the track down the remaining valley. Crossing creeks and rivers before arriving at Routeburn Shelter and the end of this section of my adventure. Over the next two days I would be finding my way back to the beginning of the track, but that will be for another post. The Routeburn Track is one of the shorter great walks. It offers a stunning variety of terrain and absolutely awesome views; it is well worth taking the time to enjoy.
-Ed