The Mora Garberg takes a new path for Morakniv. As a result the Mora Garberg is seeming to be the truest realisation of this new direction. It all started with the Mora Robust Pro and continued on to products such as the Mora Bushcraft Black. These are both two very capable knives but both lacked full tangs and this is where the Garberg comes in which offers great durability and a very solid package overall. This is our full review on the Mora Garberg.

Before we start on the Mora Garberg here are some of the other Mora (Morakniv) knives we have reviewed.
The Mora Garberg takes a leap toward a stronger, heavier and more premium feeling product. Consequently as bushcraft becomes more popular the market is expanding. Customers with an existing knife are perhaps looking for an upgrade and also to make more of an investment on their critical outdoor gear. 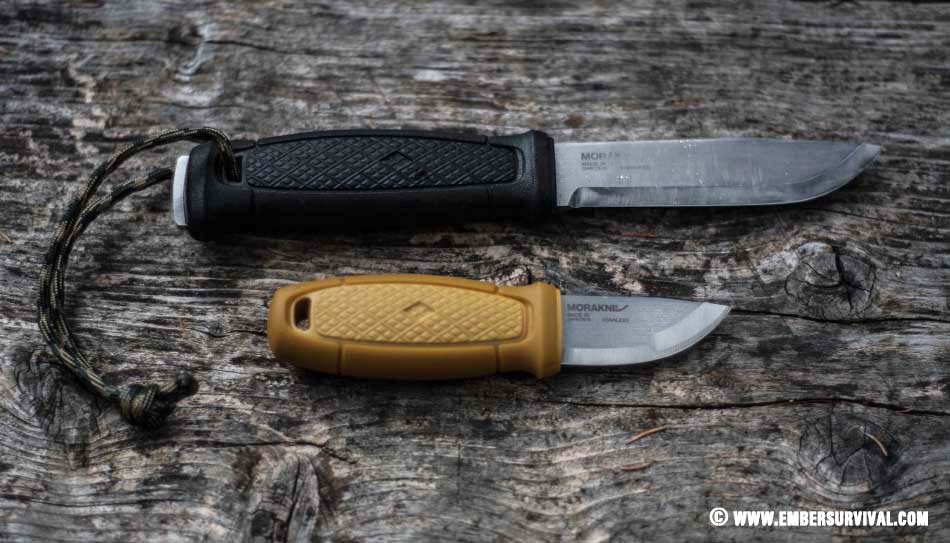 The Garberg has a higher RRP (over £100) but with an impressive feature list. Full tang construction, a 3.2mm thick stainless steel blade and exciting sheath options this price does not seem so unfair. On the other hand a little uncompetitive perhaps. This is completely subjective. Of course you can be perfectly suited with an inexpensive Mora Clipper and it's up to the individual to decide what model is the most appropriate for their adventure and end use. For those longer more remote trips the Garberg comes into its own. 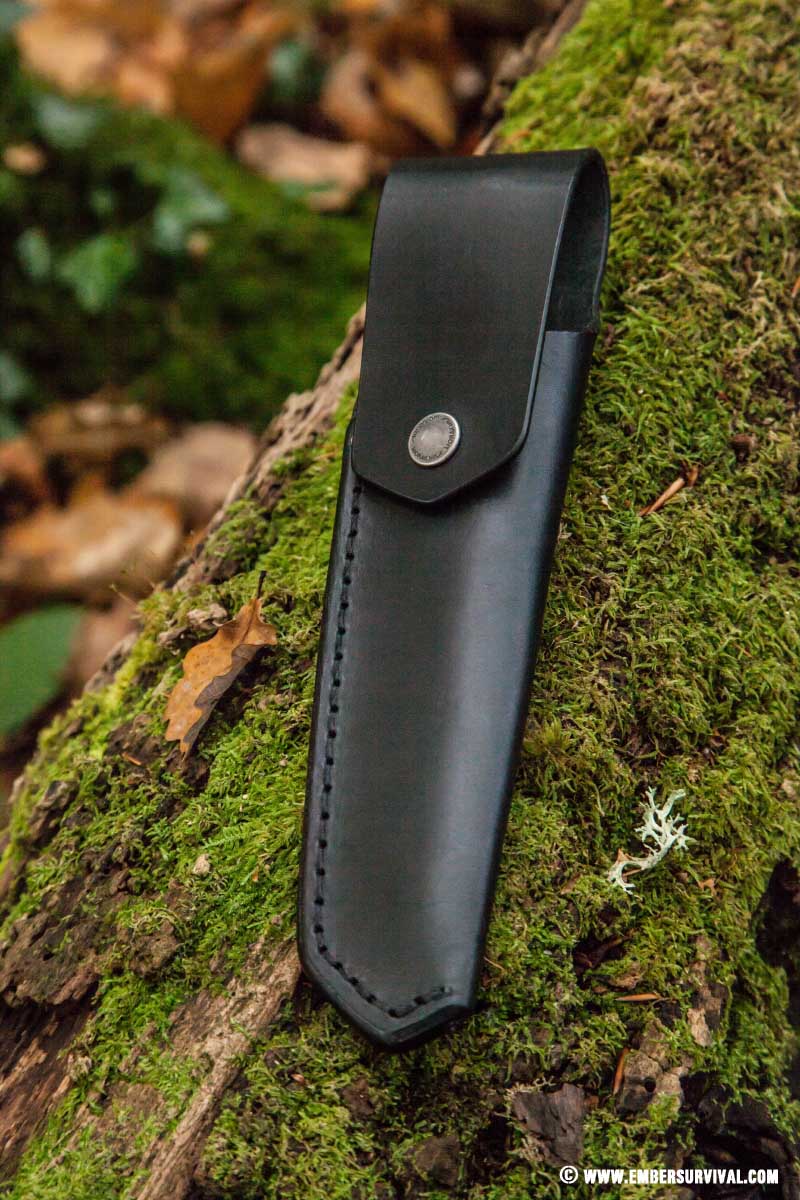 Before taking the Mora Garberg out into the field I decided to give it a sharpen and see what the knife has to say before using it in earnest. Sharpening it out the box, first using my water stones and then using a SpyderCo Tri Angle Sharpmaker to reach that micro bevel. The knife gets impressively sharp.

I noticed how I had to adjust my chest lever grip to accommodate the handle shape, at first I was slightly put off by this however with time I have come to prefer the shape of the Mora Garberg handle over some of my other comfortable knives. So please give it time to get used to this new shape, I found that putting my thumb length ways along the handle seemed to work best. The grip material is synthetic with a texture running on the palm swell. It's not a ‘sticky’ material and it can be marked with a finger nail if you try hard enough. I didn’t notice the grip being slippery when damp but it doesn’t excel in this field either. I feel that Mora chose to make the Mora Garberg an all rounder and the grip material is an example of this. A compromise between durability and grip in the widest range of situations possible. 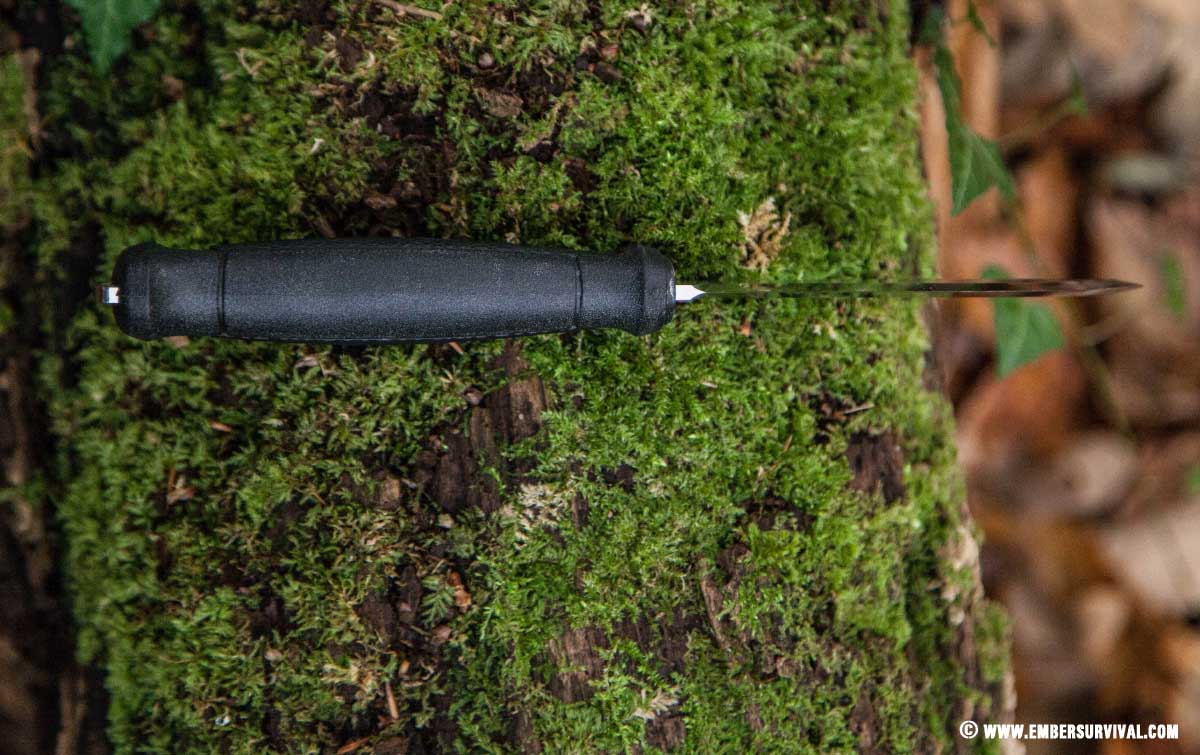 Out into the field for a wood stove fire lighting demonstration and I was battoning through seasoned hard wood for a couple of hours. The Mora Garberg worked well at dealing with such hard material, the micro bevel helps to protect the edge somewhat. After the session I inspected it and noticed that it was still sharp. Fantastic news for those longer more remote trips where edge damage is an issue but you may need to consider taking multiple sharpening implements to fully sharpen both bevels on the blade. That would mean taking another bit of equipment into the field. The sheath I chose was the leather option, it does also come in a plastic multi mount version which could be useful for people who want to mount it on rucksacks, other equipment or vertically on the belt for example. I went for the leather as I believe its longer lasting and grips the knife better. I have a neck knife for when I’m in and out of a canoe and I have also found vertical belt carry to be unconformable but this is only personal preference. 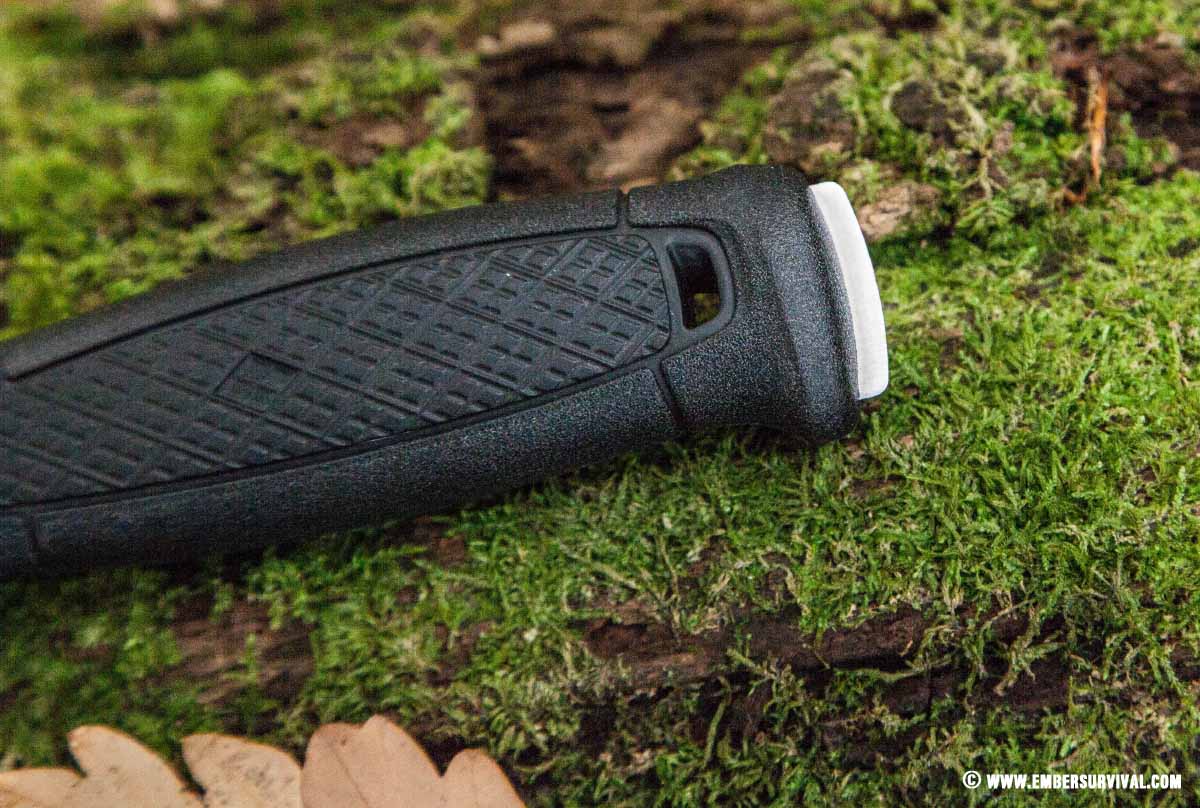 The leather sheath has a large flap with a solid popper button. Resulting in a totally secured knife. This flap does take a lot of getting used to when you come to put your knife back in the sheath. I see the Garberg as a remote backcountry knife and so you are taking it in and out of the sheath all the time and so I prefer the extra safety that comes with the flap to say the convenience offered by always open sheaths. For when Im instructing knife work I would have another knife to hand to draw when I needed as opposed to using the Garberg.

The Garberg's the spine is great for striking firesteels and also preparing tinder. Being able to rough up many natural materials using its ridgeground spine. The finishing on the spine is less than ideal as mine was a little sharp in places. However you can flatten it with a stone in no time at all. The knife also has a butt which has the protruding tang to help reinforce its strength when striking hardened materials this allows the knife to be a bit more of a handy survival tool also.

The weight and feel of the knife are solid. I would certainly take it with me on a longer trip where I would appreciate the durability of the grind and sheath closure as it provides extra reassurance that you wont lose your knife accidentally with it slipping out. The addition of that micro bevel helps in protecting the edge from dings and being rolled. Overall the Mora Garberg is a great knife and outdoor tool. My only gripe is that for me the palm swell is just a tad too small. However to be fair I have this complaint about most knives I use and with this being a mass produced bit of kit is to be expected and its still perfectly usable. Highly Recommended!
-Sunny