Fällkniven is an internationally renowned Swedish knife making company. Started in 1984 and has grown to be a very technical and respected brand. Today they are producing some very high end knives and sharpening tools which are highly sought after. The Fällkniven F1dz is a survival pilot knife and the subject of our full review and field test today.

The Fällkniven F1dz has been on my wish list ever since it was announced. I was attracted to its fine workmanship, small footprint and its unique aesthetic. I was also curious to try out a convex grind on a survival knife and the Fällkniven F1dz with its new Cobalt-Special steel seemed to be perfect for this exciting trial. 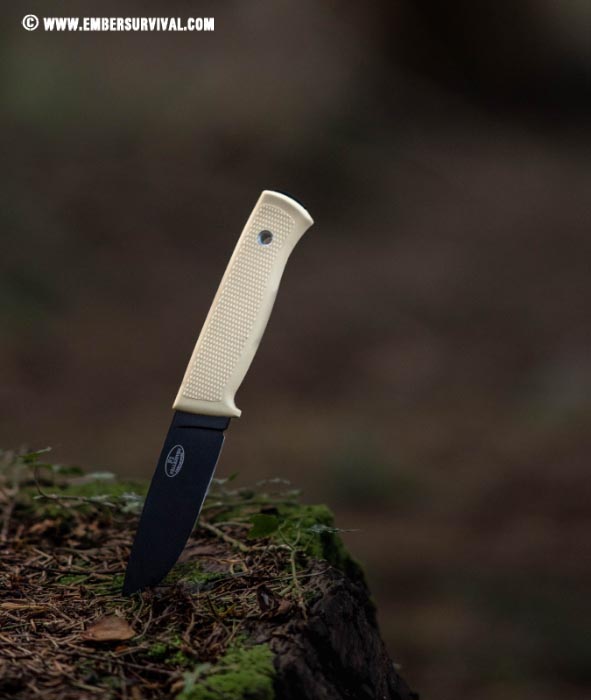 For those longer backcountry trips I feel the F1dz would be perfect, where the weight of an item should be carefully considered but also where something of robust quality and efficiency would be required. This mix of features can only be met by high quality and well designed items.

The blade on the Fällkniven F1dz uses a laminated steel made of a Cobalt-Special centre which is of medium carbon content wrapped in a low carbon high chromium outer layer to finish off the lamination. Having a high chromium content in the outer layer helps resist most types of corrosion and with a higher carbon content in the middle helping with cutting, edge retention and overall bite. The thought behind this choice of metals gets very technical but when you are far from home, having a knife up to the task is vital. The lamination in the F1dz really gives you that extra confidence in using it, especially in situations that are unforeseen and put more than expected stress on a blade. 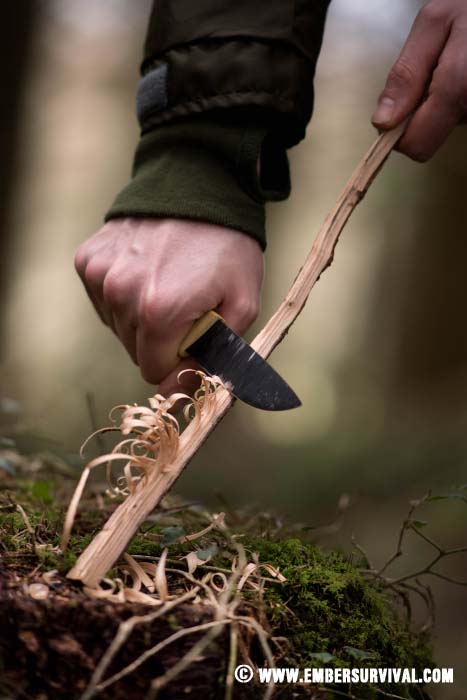 According to Fällkniven the benefits of this steel are numerous. Firstly it results in a very strong knife when it comes to resisting torque, which is a commonly overlooked feature when it comes to knives: the F1dz can withstand over 100kg of strain. If your knife cannot withstand unusual stresses, such as twisting or prying, then you are limited to a narrower end use window. Moreover, out and about we cannot predict what events will transpire so having a survival knife that can tolerate changes in plan, terrain or indeed use is vital to mission success. 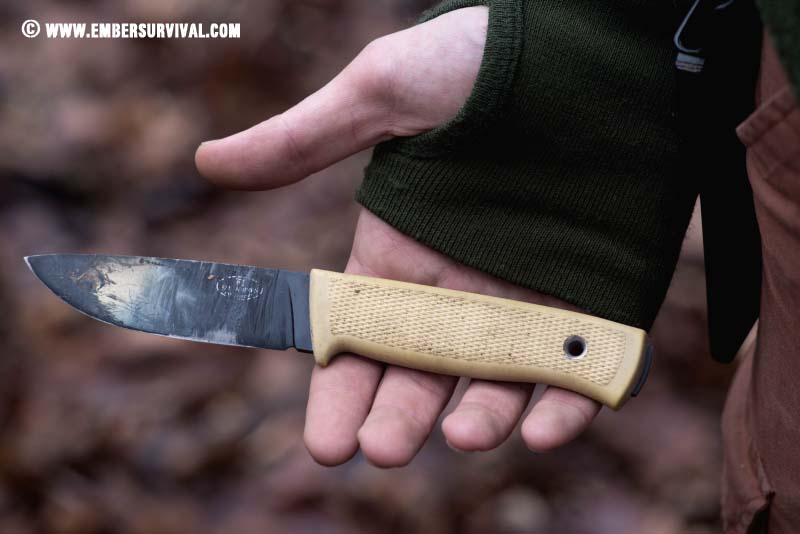 The steel in the F1dz resists corrosion and holds an edge well. With its outer layer of laminated steel featuring high percentage chromium the knife can protect itself against harmful environmental factors. The middle layer of higher carbon helps with edge retention. Both these features come into their own on remote backcountry trips. Having a more targeted approach to steel placement is very beneficial to preventing corrosion. This is instead of simply using a coating to protect the steel. 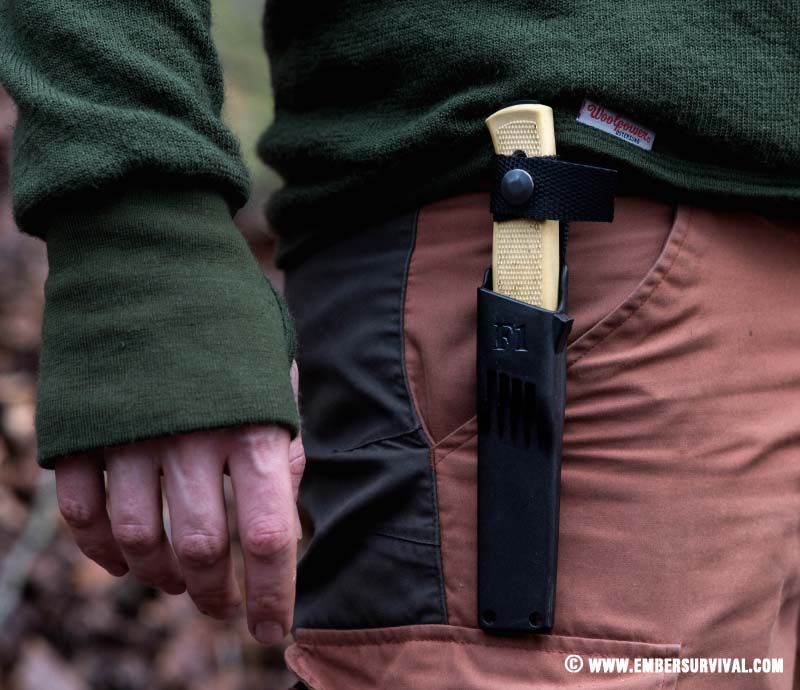 The F1dz also features a coating that is made of Teflon and ceramics called CeraCoat 8H A1. A paint applied to the blade to reduce reflections and further protect against corrosion. This is a military spec knife so a dull non reflective blade surface is ideal.

In the woods the Fällkniven F1dz feels right at home, it's so light when worn on the belt that it melts away into the background when not in use. Due to its low weight it does not pull at your clothes.  It’s footprint is small and discreet so at first the knife does seem a little small but don't be fooled, it certainly does its job. 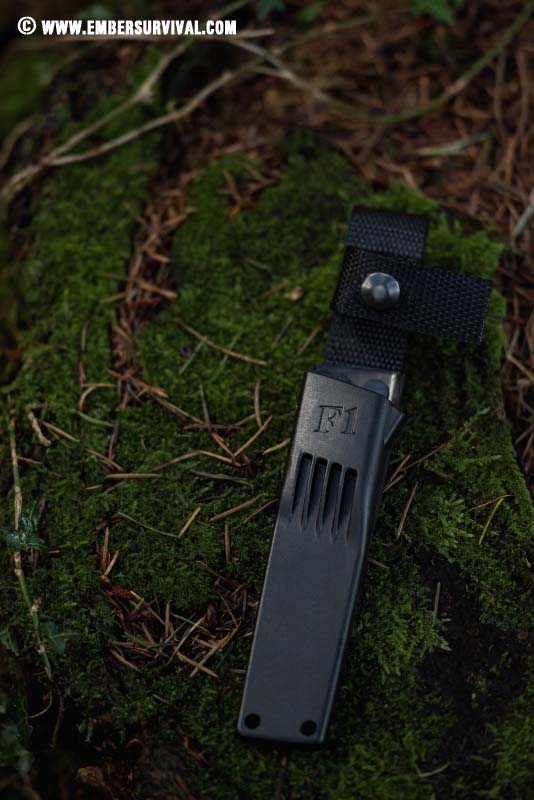 Using the F1dz to baton down dense wood and splitting it in preparation for feathering sticks the knife performs very well. The convex grind takes a few strokes to get used to, so making those fine curls takes a bit of practice, but once you find the angle it works as expected. If you are familiar with a convex grind then you will have no issue getting to grips with the F1dz. Convex grinds work in a similar way to an axe but on a smaller scale and normally produce a cutting edge that is more durable and stronger than other alternative grinds.

With your smaller kindling assembled and fine feathersticks constructed. You can now strike a firesteel and produce a shower of concentrated sparks. You can direct these using the ridgeground spine on the F1dz into your tinder. The smaller blade length makes the knife very easy to handle for this fine work. 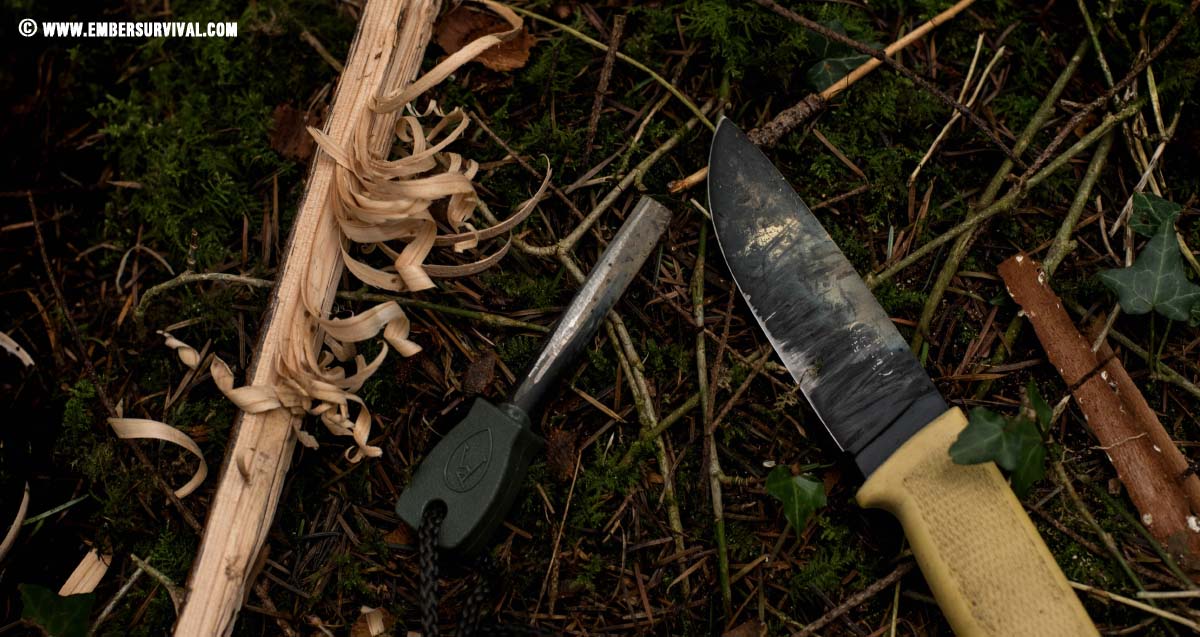 The fire is lit and the F1dz is no longer needed. However it’s only a grab away when held securely in its Zytel sheath. This material is a nylon reinforced by fibreglass. Offering the user a wide array of protective qualities such as not conducting electricity, resistance to many solvents and abrasion resistant. The sheath offers a permanent second lock in the form of a fabric strap with a press stud when it wont be used in a while. The sheath has drainage holes, a strong belt loop and is surprisingly lightweight. The temporary lock on the sheath is a little weak for my personal taste. It also doesn't ‘click’ when the knife is placed all the way into it. This is a nice issue for tactical users perhaps but I like the sound feedback of knowing the knife is secured in the sheath. I would  prefer a stronger temporary lock.

The handle of a knife is equally as important as the blade. If the handle prevents you from exerting, in a proper fashion, the force needed to accomplish a task then it renders the blade useless. The F1dz’s handle is made from Thermorun. A sturdy plastic with rubber like properties. According to Fällkniven it resists water, weather, heat, solvents and chemicals such as DEET. This is particularly interesting as this common insect repellent can cause a lot of damage to synthetic materials so having such an attribute to the material makes the F1dz great to anyone out and about in mosquito territory! 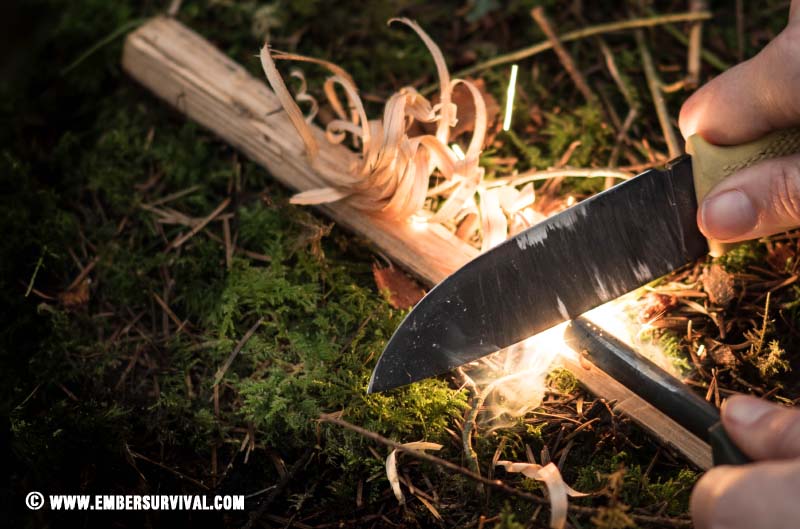 The shape is slim for my hands and I wish the palm swell was a little bigger. With size 10 hands it means you have to really hold the handle with a stronger grip when working on tasks. However the F1dz feels fantastic in a chest lever grip with your little finger resting perfectly against the tail of the handle. The F1dz feels its best when held in a chest lever.

There is a lanyard hole but I feel this is a little too far into the handle. When you have cord running through it your little finger is now resting upon that cord instead of the handle. I do not bother connecting cord to the knife and instead keep the handle bare as it makes it more comfortable to leave it as it is. The tang is a broad protruding type that is visible from the butt. Adding to the 'survival feel' of the knife as the user can now break or soften material using the small metal butt sticking out. 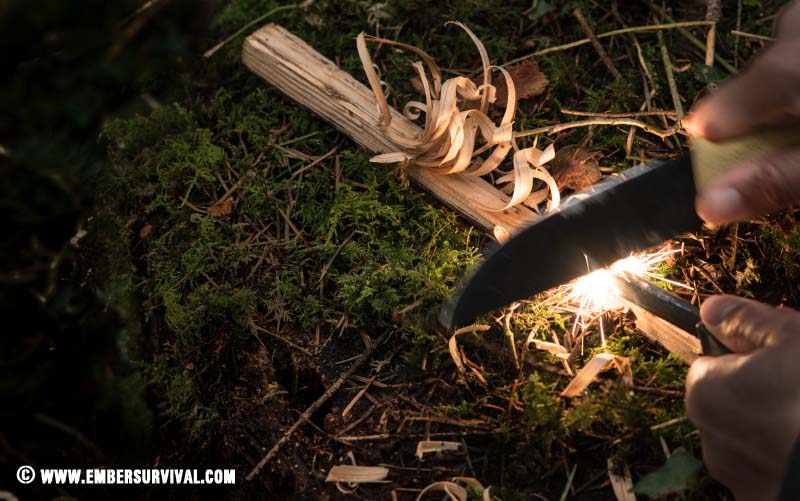 Overall, the F1dz is a subtle knife that outperforms its appearance. With its convex grind the steel holds its edge really well. For instance after some serious abuse battoning dense wood. A short strop and the edge is straight back to razor sharpness. It is clear that the F1dz is a very well engineered outdoor tool. The fact that Fällkniven takes the time to break test their steels is testament to a commitment to producing really great equipment. I would certainly take the F1dz out to remote backcountry and rely on it for longer trips. I think it would make a great pairing with an axe and saw. Offering the user a complete woodland gear system. It's fantastic to have the knowledge that if the other bits of equipment did go missing or fail. The F1dz on its own can accomplish all the tasks we encounter in the backcountry. Each new Fällkniven knife is covered by a ten year warranty.
-Sunny