I think writing about knives over and over again would turn any normal person to boredom but I genuinely find knife design to be a fascinating subject. It involves many subtleties and considerations to get a knife just right. Any manufacturer can produce a sharp object, it’s in making this into a fully-fledged tool where the magic has to happen. This is a full review and field test on the ESEE RC4.

I have seen the ESEE knives online and wanted to see what all the fuss was about. Lately I have been in search of a more robust knife to use on overseas expeditions as well as around camp here in the UK for stronger tasks like game prep, perhaps the ESEE RC4 would be the one for this role. 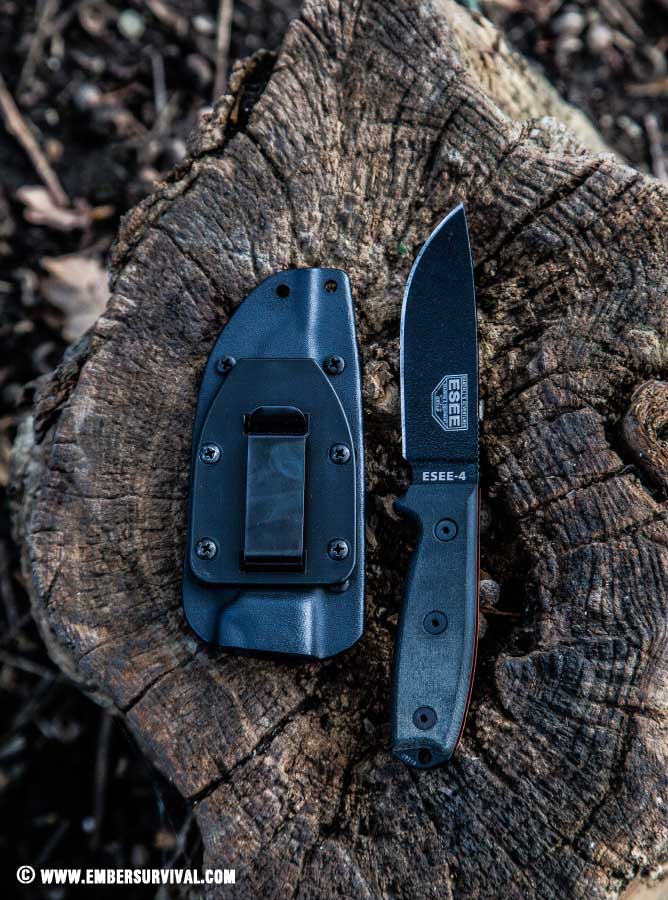 Design of the ESEE RC4

ESEE are already pretty famous for the quality of their gear and the ESEE RC4 is no let down. From opening the box the first impressions are of a blade of stunningly good quality with perfect finishing and that sheath. It really steals the show! Its simple design works so well and it’s probably the best sheath I have used thus far. 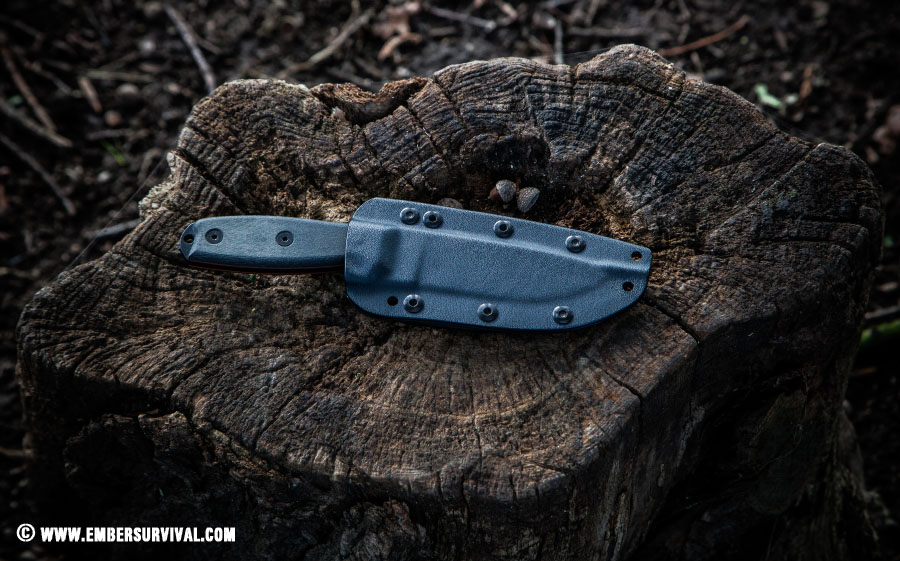 So starting off with the ESEE RC4’s sheath, it’s made of Kydex, which is a high quality thermoplastic renowned for toughness as well as scratch and chemical resistance. The sheath has a matte finish with a light textured feel and is strong but light in the hand. Kydex is so rigid it holds its shape very well, so if you are like me and using your knife constantly throughout lessons or trips, which means drawing it out of its sheath many times, it’s great to know that it won’t gradually start to loosen around the knife and cease to hold it securely. The sheath construction also includes a drainage hole at the base, two lanyard holes and a belt loop attachment.  The knife slides in with a satisfying click to indicate it’s locked in place and it’s held there firmly. 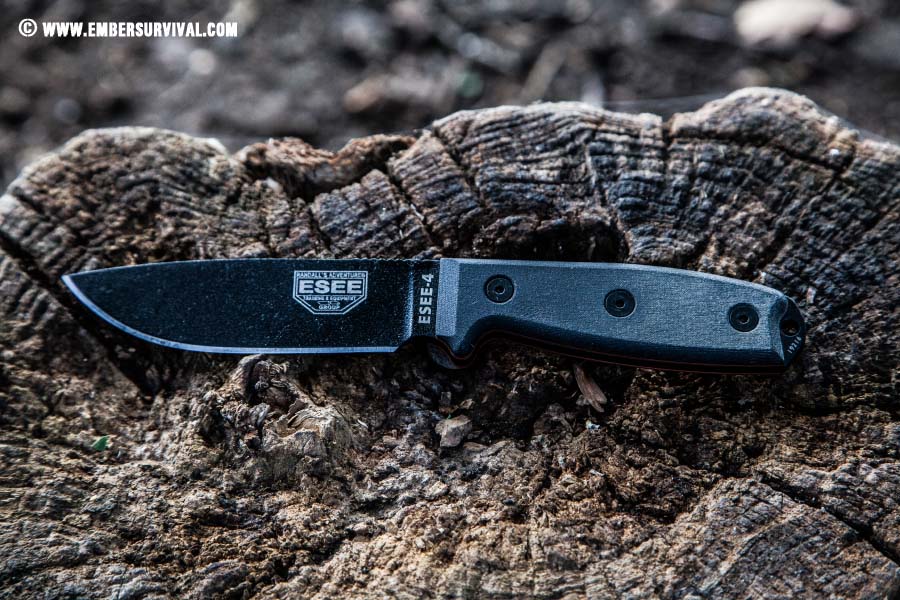 The handle on the ESEE RC4 features flat scales but it has a curved section running up towards the finger guard in the form of a slight outward curve. There’s no palm swell so don’t expect to spend the whole day carving around camp with this knife. Using it I find the handle to be perfectly adequate for a variety of tasks, and with time using the ESEE RC4 it has grown on me a lot, however it’s not a knife to have in your hand all day. The scales are replaceable and are made of Micarta which is a composite of thermoplastic and fabric constructed in layers. It’s incredibly strong and is not affected by extreme temperatures, so great for dealing with a wide variety of different climates. The scales are slightly textured which aids grip but I did notice gun oil running off the blade and staining the handle somewhat, this could affect the use of the knife if allowed to build up and make the scales smooth, to remedy this I occasionally wash them in hot water which returns them to normal. Perhaps I’m being a bit too enthusiastic with the gun oil application?

ESEE RC4 in Use

With the knife in your hand there are two main grip positions. Firstly one is for strong cuts with your fingers below the guard in a classic forehand grip. Secondly is choking up on the blade with your thumb having to come up to rest on the jimping on the lower part of the spine and your index finder in the choil. I also like an experimental third grip, fingers below the guard but with the thumb brought up to the jimping. As this grip keeps the fingers below the guard but with the thumb adding some control. Using this grip the fingers are well away from the cutting edge. The problem with choking up fully on the RC4 is that the choil on the blade is not wide enough for my index finger. The ESEE RC4 has two blade options, fine edge or fine and serrated. I would only want to use the fine edge as it gives you more control over fine cutting and therefore makes the knife more of a bushcraft knife, which in my opinion makes it more useful in the forest. However serrations do make cutting rope a lot easier. Decisions! Decisions!

The fine edge ESEE RC4 allows you to be extremely versatile with what you do with it, the one issue with Scandi grinds is they can be rather susceptible to dings and dents. The full flat grind on the RC4 is a bit more resilient but it does take some getting used to. The first few times I used the RC4 I found it took more work to complete tasks that I performed with a Scandi grind knife, but as time went on I got used to the new grind angle and tasks started becoming easier, even feather sticks! If you are aiming to carry out strong knife tasks, such as battoning then the RC4 stands up much better. Above all due to its stronger grind.

ESEE are using 1095 carbon steel for the RC4 due to its toughness and edge retention properties. As always the issue with carbon steel is that it is prone to rusting. Keep it covered in oil and you will have no problems. ESEE have now released a stainless steel version. However for practical use the carbon steel wins hand down for toughness and edge retention. This is what you want and need in the field. Just keep it wiped down with an oil cloth which you can carry with you easily in your pack. However during my experience the knife has not rusted at all during use in very damp conditions. Could be due to my overzealous gun oil application!  The entire blade is powder coated to prevent rust, however the emblem and blade edge are of course, uncoated and therefore able to rust. The ESEE RC4 cannot strike a firesteel using its spine, that powder coating is sadly too soft. At the base of the RC4 there is a rounded pommel with a serial number and lanyard hole. ESEE provide a very good lifetime warranty on their knives, so keep the receipt!

If you are looking for a wilderness knife that is tough as nails but not overtly heavy then the RC4 would be a good choice. Keep it oiled to prevent rusting. The varied use capability and the sheath is pure brilliance. I can see the RC4 becoming a knife to take along with you to far flung places to be on your belt. I just wish it could strike a firesteel! Highly Recommended
-Sunny