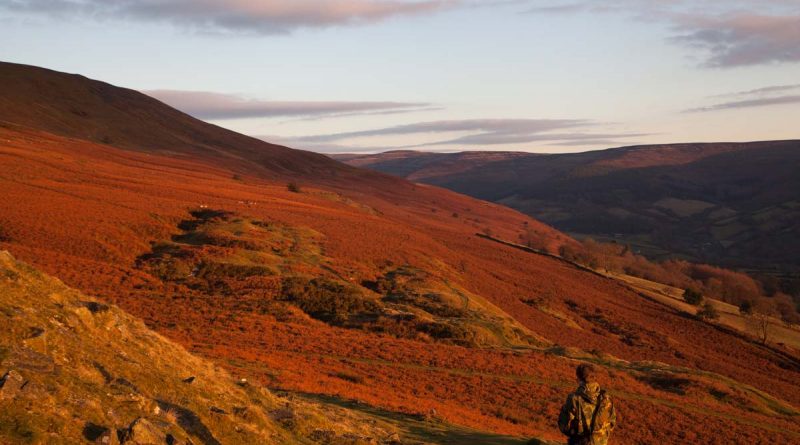 Back to the hills, leaving the tarmac and breathing in fresh cool air. Wild camping in The Black Mountains during winter make a perfect landscape to travel through and when you are carrying everything you need to survive on your back it is a wonderful environment to spend nights out in.

I was joined by a good friend and fellow outdoorsman; we spent three days bivvying out on the hills and walking over some tough terrain trying to reach an idyllic wild camping spot hidden in a forested valley. Would we reach this highly sought after spot? A combination of the short winter days and a rather lethargic morning start meant we were walking through darkness yet again. 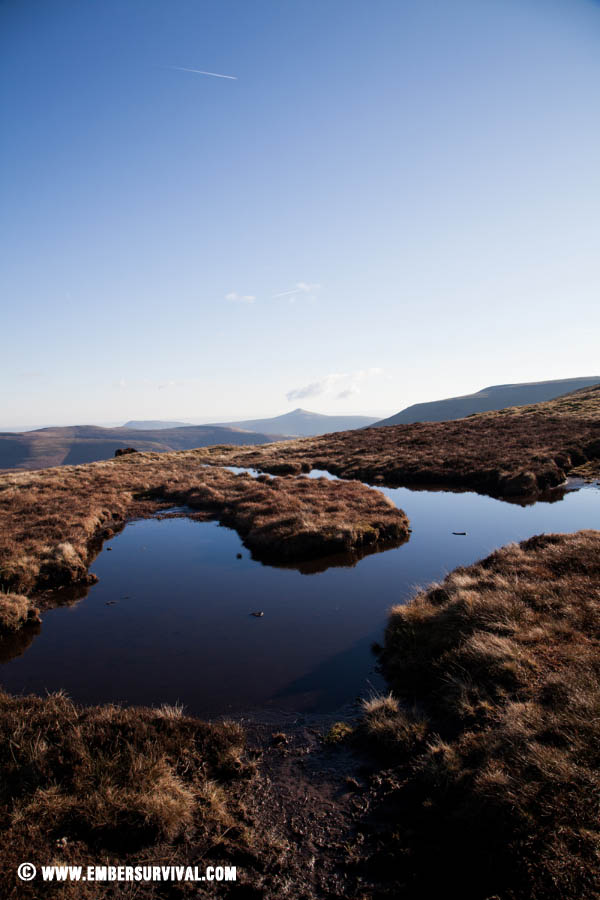 One of my favourite views and photographs with rich deep colours up in the Black Mountains.

This trip would partly follow the route I did solo almost a year ago, up to Table Mountain from Crickhowell on the first day and then continuing around to Stanton on the second.

However the light was fading fast by the time we got onto the hills, so it was decided to pitch camp for the night. We found a stone bivouac on top of Table Mountain and with a tarp strung over the top of the circle it made for a great little shelter from the wind. Which at this point was freezing and getting stronger. Wild camping in the Black Mountains is always eventful.

It’s equipment failure that always feels the worst especially when it happens on a trip. I pride myself with meticulous gear maintenance but my beloved Primus Express Spider just did not want to cooperate this time and didn’t work throughout the entire trip accept for rather gingerly the first time boiling some water. Thank goodness for Kieth’s stove (MSR Pocket Rocket), which did both our cooking for the three days.

Sleeping out on top of a mountain, with the stars out in full force is always a humbling experience. Every now and then when the clouds cleared I would stick my head out of my bivi and into the cold. The wind was pretty strong all night and at various points had us both worried for the tarp pitched above. it managed to hold thankfully.

Waking up in the field is the epitome of freedom. With water collected, gear packed and breakfast eaten we headed off towards the higher ground and the ridge that would eventually connect us with Mynydd Du forest.

Wild Camping in The Black Mountains

The landscape was a deep red, burnt orange and cool blues. Walking in the winter season produces these vivid colours and it’s one of the reasons one should strive to head out to backcountry throughout the year.

Up on the ridge it was perfect walking weather, not a cloud in the sky and with a cool breeze blowing and the viewing distance was exceptional.

We saw a collection of people up ahead resting for a drink or perhaps there were just getting ready to start their walk? We decided to catch them up…

The group vanished in front and then reappeared a very short while later on the ridge opposite us. I will leave it to you to come to your own conclusions as to who that was. I have never seen anyone move that fast over the type of terrain found in the Black Mountains.

With light fading again we pressed on towards the forest and lower ground. Having covered a considerable amount of ground in a rather short space of time. We were eager to find a camp spot. The location we were in now was predominantly working forest which is not the best to stay in. Trees jammed right up next to each other along with drainage problems made the whole area approaching Mynydd Du rather depressing.

Pressing on into the disappearing light we found a track leading into complete darkness through Mynydd Du. This would take us to Grwyne Fawr. We unpacked and turned on our headtorches for the descent into the imposing gloom. All the reasons to why moving through forest blocks are pretty bad were presented to us. Hardly any room to move, really damp and with random streams gushing out of nowhere. Hardly anything lives naturally in them so they are eerily quiet apart from the occasional distant owl.

We moved out into open space and the blue light from the moon lit up the area. We were heading towards a stream trying to use our ears to locate the sound of gurgling water. This led us onto more woodland tracks which eventually took us back onto the tarmac. A rather welcome break I must say. No bogs to worry about!

The rest of the walk turned into a quest for a roaring fire, a pint of something and a seat! We found that in Stanton which required a determined trek to reach through the mist and darkness. Until next time for some wild camping in the Black Mountains.