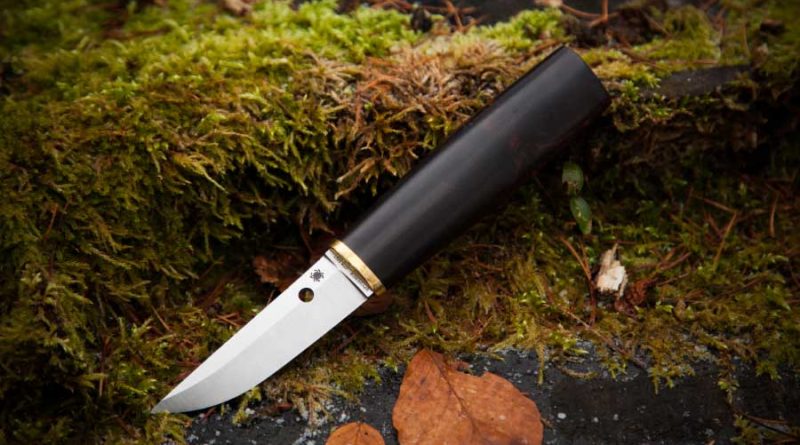 The SpyderCo Puukko is a classic take on a traditional Finnish  knife. Using one of the most advanced steels and top class materials they have brought this quintessential design into the modern age. Let’s discover more about the SpyderCo Puukko Knife in this full review.

I was already aware of SpyderCo’s great attention to detail as-well as the overall high quality of their products and it was great to see it again in some of their latest offerings.

For backcountry hikers who will be preparing food, lighting fires and most importantly actively moving through tough terrain. This knife will appeal with its clever and robust design. SpyderCo have many correct decisions for their Puukko. This may be the knife for you.

CPM S30V is a hardened steal which made via powder metallurgy. A process that involves mixing fine materials in powder form and compressing them into the desired shape. Finally heat and pressure are applied to bond the material.

The process here is called sintering. The mix of powders is held in a mould under high heat and pressure which triggers atomic diffusion to occur more rapidly. Atomic diffusion sounds rather hard to get your head around. Think of a balloon filled with helium, eventually it with deflate, this happens because over time the atoms of helium diffuse through the balloon wall. The helium is also moving down a concentration gradient, there is more helium inside the balloon than there is outside. Back in our knife mould, temperatures just below the melting point are used to allow the atoms to diffuse across the boundaries of the particles.

The result of this is the formed metal benefits from high levels of uniformity. Which above all gives the blade on the powder metallurgy great strength.

The chemistry of CPM S30V allows for the formation of vanadium carbides which are incredibly tough metal-carbides. For instance they can withstand a lot of strain as well as giving the knife more effective cutting characteristics. Especially true when compared to more traditional chromium carbides found in cheaper knives. The grain of the knife is also very refined as a result of the sintering process. Certainly giving the SpyderCo Puukko Knife excellent sharpness and toughness.

A lot of detail there and all of that for the steel alone!

The sheath is really well made and has a drop loop carry. Consequently this is great for hiking with the knife on your belt. It dangles out of your way when sitting down or getting in and out of vehicles or craft. The sheath shows what SpyderCo is capable of producing. The SpyderCo Puukko sheath holds the knife securely moreover the well placed welt inside of the sheath protects from you cutting the inside of the sheath leather.

One of the major features of the sheath is its drop loop belt attachment which gives the user great freedom of movement when hiking and then sat round a camp fire, the knife never gets in the way.

The SpyderCo Puukko Knife is a lightweight but very strong tool. The edge is razor sharp and bites easily into natural material a woodsman may encounter. Firstly from making feather sticks to constructing tent pegs and game prep; the knife does it all and with a well balanced feel. The lack of a finger guard helps you to choke up on the blade. Resulting in greater control with the finer tasks. However it can leave the user slightly disconcerted with the heavier undertakings due to the potential risk of slippage up onto the blade edge.

I felt very connected to the SpyderCo Puukko Knife. To clarify whilst working with the Puukko its tear drop handle made from a beautiful Arizona ironwood allows for great feedback during cutting. Tang design is concealed which is a pity as I always like to see the tang for my own reassurance.

The spine of the blade can be used to strike a firesteel and creates a shower of sparks. On the other hand due to the angle of the spine sparks are slightly harder to achieve than with a true ridge ground spine. The spine is crafted in this way to minimise drag when cutting through material and it does work well at that.

The SpyderCo Puukko Knife makes for a great fast and light knife but with the build quality to last for a back country expedition. Great attention to detail along with top quality steel make for one amazingly well designed bit of kit.

Its a little expensive until you find out more about the steel. If you are planning on taking a small axe on a trip as well as a knife the SpyderCo Puukko Knife would make a fine choice as its the harder tasks where the knife lacks brilliance.