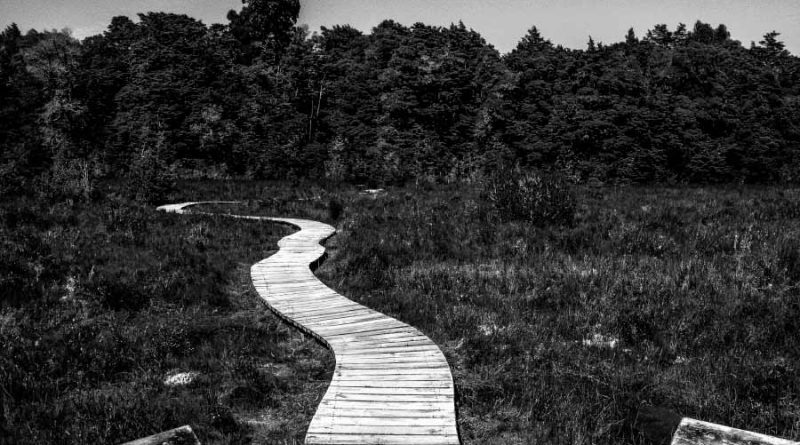 “On the edge of the Waiau River where the smooth fields of Southland meet the ragged peaks of New Zealand’s Fiordland National Park I locked the car, tied my laces and started on my way on the Kepler Track.”

Over the next three days I would be following the 60km Kepler Track, a journey that would take me from the shores of Lake Manapouri through valleys and up into the heights of the Jackson Peaks, eventually reaching the summit of Mount Luxmore a lofty 4800ft above sea level.

It being summer the trek began in shorts and t-shirt. Due to several factors, like the clean air, UV levels in New Zealand are particularly high, so SPF 30 was a must for this trip! The first day follows the river west for a short distance before breaking away at the Balloon Loop, a meander that has been cut from the main flow of the river.

The track works its way through beech forest, crossing many streams along the way with the fallen trees and native ferns covering the forest floor giving it a prehistoric feel. The New Zealand Tui and many other unfamiliar birdcalls can be heard all through this section along with the constant buzzing of insects. The forest is alive here and despite the popularity of this track I barely met another soul for long sections.

Lake Manapouri with its lovely colours.

I reached the edge of Lake Manapouri and the beach at Moturau Hut gives you the first taste of the dreaded Sandfly. Anywhere near the water at these low altitudes and you better be wearing insect repellent and plenty of it!

After following the edge of the lake I turn northwards to follow the Iris Burn up stream. Here you get your first peek of the mountains as the track begins to climb; the next few hours saw me rise 1000 feet over 16km.

Following the river up you pass through short sections devastated by the slips and avalanches that are so common in these mountains and later you reach the “Big Slip” the sight of a natural slip in the ’80s that now is low bush and grassland. If you started the track early enough you should arrive at Iris Burn hut by dinner time and after setting up my tent in the designated camping area next to the river I tucked into my dehydrated Roast Lamb, as fine a Christmas dinner as anyone could ask for. I even had freeze-dried ice-cream for dessert!

Wild or Freedom Camping is prohibited within 500m each side of the Kepler track and the Iris Burn Hut is one of the two areas on the track it is possible to camp. A beautiful spot right by the river and the weather was glorious but I was glad my tent had a bug screen as I was able to sleep tight with a cloud of sandflies hovering in my porch.

Even though it rained over night I was lucky enough to wake up to a dry, albeit misty morning. Braving the cloud of sandflies that remained in my porch I made a dash for a morning freshen up in the river. This water comes straight down off the mountains and is just the trick to freshen you up. Take care to avoid bites in delicate areas!

After packing up I prepared myself for the toughest stage of the journey. Over the next few hours I would be climbing the valley wall, following switchbacks and later steps to the second highest point on the walk, Hanging Valley shelter. As I packed my tent and left the other campers sleeping I knew I was in for a morning of punishment.

There are several spots on your way up where you could see back across the valley. However the low cloud made the journey an insular one. The relief of breaking the treeline was soon damped by the discovery that not only did the track still climb but the cloud still obscured any view. At around 3500ft there is a short track that takes you to a viewpoint and my heart sank to realise that I could see no further than 100m in any direction.

The pain continued without gain as the ridgeline continued to rise, steps helping you up to each minor peak along the way and my trekking pole helping keep me from the edge. Looking down you couldn’t see where a fall would take you.

As I stopped for a breather I turned to survey my surroundings. Looking to the southeast my breath was snatched from my body. Through a break in the clouds I could see across the valley to the Kepler Mountains themselves. In short their snow dusted peaks crisp against the bright blue sky.

No picture can truly capture the emotion of this moment. My hard work had finally paid off and I was stunned by the sheer beauty of what I was seeing. As I pushed over the peak at 4000ft I was treated to more views down into the valley of the South Fiord, one of the three deep glacial valleys that branch off from the giant Lake Te Anau.

From here the journey becomes a pleasure to walk. Dipping down into saddles and rising again to peaks there is a gentle down slope over all. At each peak I was rewarded with more snatched views through the clouds. Walking alone along ridgelines it was only the well trodden path reminding me that other people still existed in the world. Those groups that I did meet along the way only served to reinforce my good opinion of the outdoor types. I met people of many ages from many different countries. They all cheerfully discussed the path ahead and their plans. Being out in the backcountry is a great social leveller and it was fantastic to meet all of these interesting people. 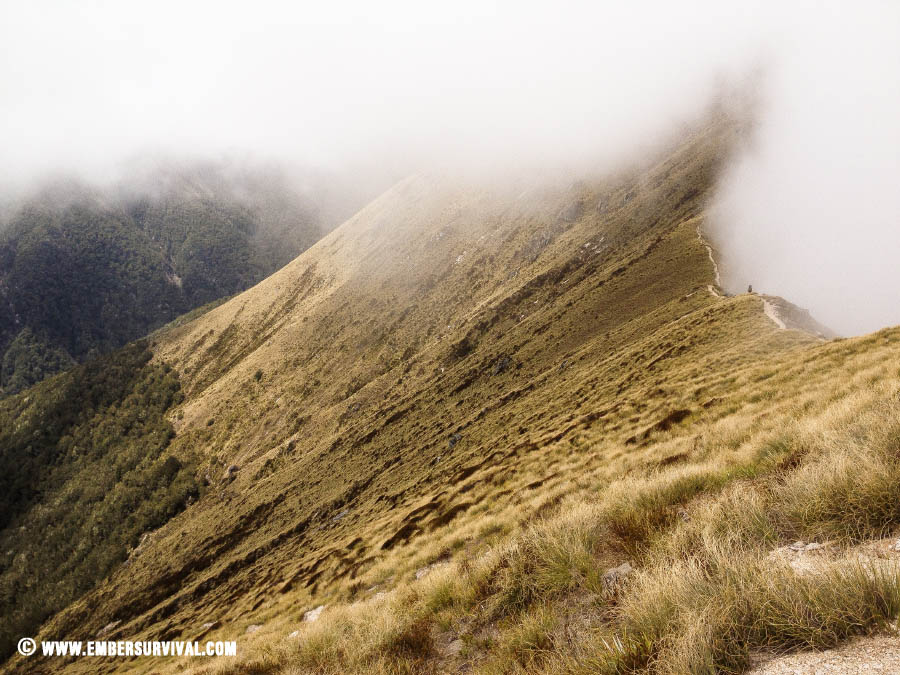 Heavy fog obscures the view North. After corkscrewing around the side of one of the peaks I reached the Forest Burn shelter. These shelters offer refuge for travellers stranded by poor weather; even in summer it is not unknown for there to be snowfall!

As I rounded the next corner Mount Luxmore, the summit of the trip, came into view. Breaking from the main track I followed the path towards the peak. Consequently back into the clouds and over several false summits until I finally reached the top. Despite the cloud that covered my view my heart soared with the completion of my goal. With little time to reflect I gathered my thoughts and headed down.

The track contours around towards Mount Luxmore. 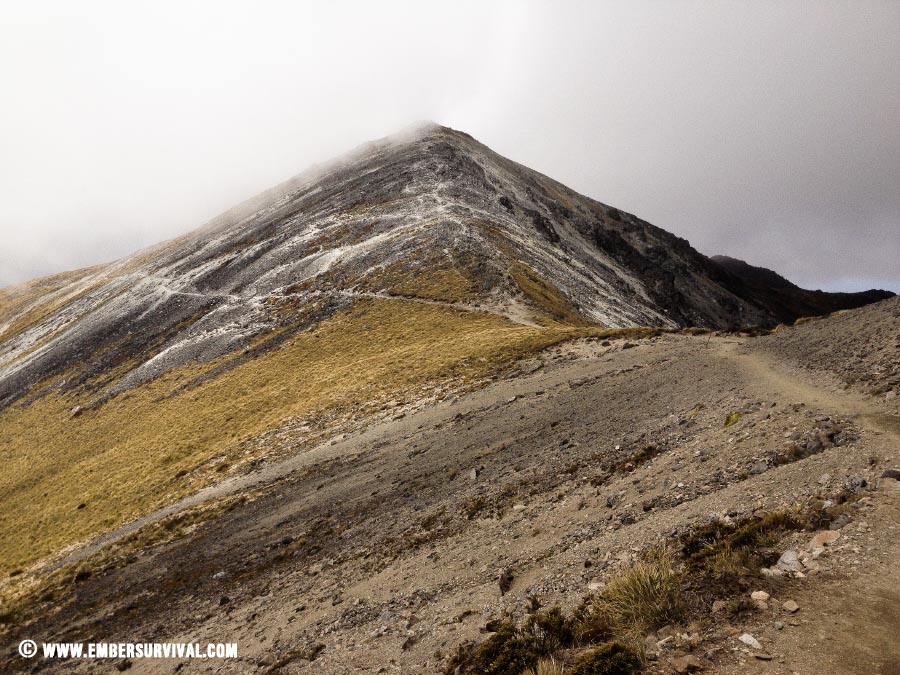 With the temperature beginning to drop I made my way down towards Luxmore Hut, my accommodation for the night. As I descended the magnificent Lake Te Anau appeared. The largest volume of fresh water in the whole of Australasia. As a result the largest lake on the south Island of New Zealand Te Anau stretches 64km and flows down through the Waiau River towards Manapouri.

The hut was something of a luxury. The indoor kitchen but the fresh tarn water on tap and foam mattress in the bunk room. In short this may as well have been a 5 star hotel and the hut ranger Pat clearly had far more interesting information to give out than my tired brain could manage.

First light is early this time of year. Despite my 0630 start the sunlight was already well ahead of me. I followed the track over the last section of hillside before descending into the forest again, with another steep section straight back down to 500ft and the edge of the lake.

From here the track stays at a steady altitude, a welcome rest for my feet and legs. It follows the lake shore around to the control gates. These manage the flow of water from the lake into the river, 4 great slabs that are winched up and down depending on conditions.

Along the final stretch of the track following the Waiau. I was lucky enough to see one of the rarest sights, a bird the area is famous for, the Takahē. A flightless bird indigenous to New Zealand it is so rare that for the first half of the 20th Century it was believed to be extinct until rediscovered in the Te Anau area. I was frozen mid-step as I saw the outstanding creature sitting in the middle of the track. Its beady eyes locked upon me. At each slight movement I made it would take a hop further away and before I could draw my camera it had disappeared into the woodline.

A few more kilometres along the forest path returned me to the bridge at Rainbow Reach and my parked car. The sense of satisfaction you get after a trip like this is unparalleled. I feel exceptionally lucky to be able to go out and enjoy experiences like this. I urge everyone reading this to turn off their computer, pack their bags and get out there!

“Ed has been enjoying and exploring the New Zealand backcountry recently. This is the first of many posts outlining what he is getting up to. Great scenery!”