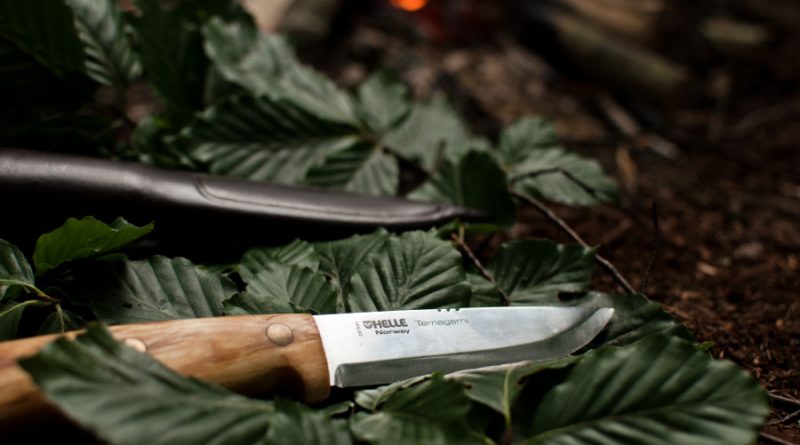 “Helle is a brand I respect and Les Stroud is a true outdoorsman, surely great things should happen if the two pair up? The Helle Temagami Carbon, let’s check it out.”

The Helle Temagami Carbon is packaged very well and like all Helle knives comes in a presentation tube with a warranty card and cleaning cloth. Les Stroud’s signature can be seen across the tube, but this will be the only place that you will find his name; it does not appear on the knife or sheath. This may have been intentional or not but the fact is I like it. Instead of making a huge fuss about having his name on the blade, like other outdoor survivors, the blade simply has Helle’s stamp, the name of the knife and if it is carbon or stainless. Les Stroud, I like the subtlety a lot.

Fire in the background, in the middle of the forest and a trusty bushcraft knife in front of you. They all go together. The Helle Temagami Carbon makes a good forest companion.

I have been using the Helle Temagami Carbon for over three months now. From carving, making feather sticks to using around camp. In all of these situations I have found the blade to be very sharp and strong, the handle to be comfortable and the sheath adequate to secure the knife when not in use. Let’s look at the details.

The blade is just less than 3mm thick carbon steel and is triple laminated. Find out more about Helle’s trademark triple lamination see here). The tang is not full but fills half of the handle and runs all the way down to the end. I have a feeling that this was something that Les Stroud would have insisted on for a absolute minimum. Any knife designed for the bush should have a good strong tang, and the one featured on the Helle Temagami Carbon is strong, more so than the normal Helle ‘rat tail’ tangs but not as strong as a true full tang knife.

On a small section of the spine there are three grooves which were supposed to help when striking a firesteel with the knife. But consequently the triple lamination process used by Helle means that the steel on the outside is too soft to scrape off material from the firesteel.

Helle has issued an update to address this issue. The grooves will now only help with their primary role which was to help grip the knife when skinning game.

The Helle Temagami Carbon has a drop point blade and a Scandinavian grind which is about 7mm deep.

The metal is secured to the handle by three rivets, one of which is hollow to allow for a lanyard. The handle wood is Masurian Birch (Curly Birch) which has been soaked in linseed oil and been rolled in bee’s wax which makes the grip very good and easy to use. I would have liked to see a slightly fatter palm swell for extended periods of use, even though the grip works very well in both the forehand and chest lever grips, it’s with the latter where my hands tend to be uncomfortable.

Together with the sheath the Helle Temagami Carbon offers a good package for the woodsman.

The sheath is made from full grain leather and is very simple in design. There is a plastic insert which protects the leather from being cut. To clarify with any knife you should always be careful when you take it out of its sheath. The sheath does its job and grips the knife securely. I would have liked to see a fastening or a deeper sheath design on the Helle Temagami Carbon.

The added weight of the bigger tang (compared to other ‘rat tail’ Helle’s) means the knife feels more balanced in the hand. Which allows you to have greater control on applying force. The balance of the Temagami is the best I have seen in any Helle knife. My other models have suffered from being far too top heavy which resulted in tilting forward when you loosened your grip on the knife. With the Temagami I can hold it in my open hand without it falling forwards. For instance the Helle GT is very unbalanced and unless you grip it firmly the knife will always fall forwards out of your hand.

Out in the Woods

As the blade holds a very sharp edge it makes starting a fire very easy. You can produce a large amount of feather sticks with ease  although you will have to carry a separate firesteel and striker. Carving is great with this knife out the box. You can strop the blade too which really gives it a razors edge.

Tasks like battoning have never seemed to go hand in hand with Helle knives as they mostly have those very thin ‘rat tail’ tangs but the Temagami is different. I like the fact that the knife has enough tang to be able to split small bits of wood. I normally stop at about 4cm in diameter when using the Temagami, anything bigger and I would use my axe. You have to remember that the Helle Temagami Carbon is a rather subtle knife.

It would be great as your first bushcraft knife or as a step up from a Mora Clipper. If you are looking for a slightly lighter weight hiking knife then I would say the Helle Temagami Carbon would be worth a look.

As with any outdoor purchase it’s about matching what you need to what you have to spend. I like the Temagami a lot but if I was going to pick a knife right now to take with me to the remote wilderness it would not be the Helle Temagami. The key point is that it lacks that complete full tang.

It is one of the best production knives I have used. I will say it’s easily Helle’s best knife so far. Its great for English bushcraft with tasks that are lighter and easier on the knife.